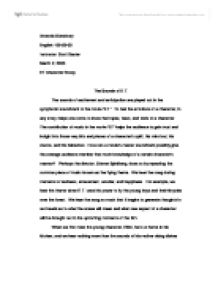 The Sounds of E.T.The sounds of excitement and anticipation are played out in the symphonic soundtrack to the movie 'E.T.' To feel the emotions of a character

Amanda Stansbury English 106-53-03 Instructor: Scott Baxter March 2, 2006 ET Character Essay The Sounds of E.T. The sounds of excitement and anticipation are played out in the symphonic soundtrack to the movie 'E.T.' To feel the emotions of a character, in any story, helps one come to know the hopes, fears, and traits of a character. The contribution of music in the movie 'ET' helps the audience to gain trust and insight into those very bits and pieces of a character's spirit, his mind set, his stance, and his behaviors. How can a movie's master soundtrack possibly give the average audience member that much knowledge of a certain character's manner? Perhaps the director, Steven Spielberg, does so by repeating the common piece of music known as the flying theme. We hear the song during moments of sadness, amazement, wonder, and happiness. For example, we hear the theme when E.T. uses his power to fly the young boys and their bicycles over the forest. We hear the song so much that it begins to generate thoughts in our heads as to what the scene will mean and what new aspect of a character will be brought out in the upcoming moments of the film. ...read more.

They are the disguised sounds of adrenaline and anxiety. We can identify with these sounds and feelings which are presented, and therefore we can identify with Elliot. We are not given the chance to see Elliot's room, his element, until he introduces it to his new found friend, E.T. With nothing more than the sounds of footprints, E.T.'s purring breath, and the sight of Elliot's wide eyes, the audience watches as E.T. and Elliot observe each other in silence. As they come to know one another one will notice that there is not dialogue, nothing more than the light trill of a string orchestra and high-pitched violins to accompany the audiences' imaginations. E.T. is becoming comfortable with Elliot as Elliot is doing the same with E.T. E.T. is full of confusion, which is accompanied by mischief and wonder. We see this as he explores Elliot's room. The solo sounds of Elliot's paint brushes in a paint tin clank together as E.T. explores. The exploration of Elliot's room and all of his gadgets and experiments illustrates to us that he is a smart, science driven child who longs to create, invent, explore, and build. ...read more.

back to life. That scene gives us the guarantee that E.T. thrives off of kindness and love. He is gentle and curious. The synchronous sound of E.T.'s purring breath, like that of a baby kitten, expresses to the audience that he is gentle and soft hearted. It seems almost impossible that E.T. could ever cause any harm. Aspects such as these help us to know and fall in love with his character. The music is what feeds the soul and emotion of 'E.T.' It helps the audience to overcome the silence and leads them to think during frequent scenes with no dialogue. The redundant, orchestral themes that play in and out of many scenes help to identify each character's mood and state of mind, which ultimately brings the audience to know the character's spirit. The music helps up to know when they are sad, happy, content, hurt, or amazed. It leaves us with the idea of not only what they are feeling or how they appear on the outside, but who they are on the inside and what their nature is as a character and individual. ?? ?? ?? ?? 2 ...read more.