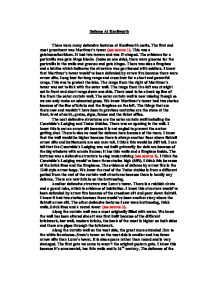 Defence At Kenilworth There were many defensive features at Kenilworth castle. The first and most prominent was Mortimer's tower (see source 1). This was a gatehouse/barbican. It had two towers and was D-shaped. The evidence for a portcullis was gate hinge blocks (holes on one side), there were grooves for the portcullis in the walls and grooves and gate hinges. There was also a fireplace and a latrine which indicates the structure was garrisoned with soldiers. I know that Mortimer's tower would've been defended by arrow fire because there were arrow slits. Long bow for long range and cross bow for a short and powerful range. This was to protect the lake. The range from the right of Mortimer's tower was out to link with the outer wall. The range from the left was straight out in front and short range down one side. There used to be a back up line of fire from the outer curtain wall. The outer curtain wall is now missing though so we can only make an educated guess. We know Mortimer's tower had two stories because of the line of bricks and the fireplace on the left. ...read more.

This is because they are not needed. The mere was defence enough. The Inner Court There are six main defences of Kenilworth, Brays, Causeway, Keep, Lunn's tower, Swan's tower and, of course, the great mere. The castle was granted to Geoffrey de Clinton in 1120. The first castle was probably made of wood and would've been rebuilt in stone in 1174 by Henry II. King John added the second set of outer walls and the water defences in 1210. The longest siege in Medieval England was in 1266 and lasted six months. Inside the wall by the ticket office we looked at the cross-section of the wall. At this point it does not seem like a very defensive structure because it doesn't have very thick walls. Mortimer's tower and the mere make up for this defensively. Inside the guardhouse, the garbage chute is not designed like an arrow slit because the water level would've come up to the wall. It would've been too cramped. The evidence of habitation is a fireplace/chimney. There is evidence of desecration and that is graffiti. The originality of some of it is questionable. The line of fire available from here is back towards the keep. ...read more.

There was a huge ornate archway with stairs leading from the courtyard. The evidence to show this hall was used for entertainment is the columns, arches, roof (1347 Hammer beam), large ornate windows (see source 7), fireplaces, oriel windows and bay windows. The main fore building of the keep has been made into a Loggia. That was then enlarged and more rooms were added, there were arches above the entrance and from the inner court to outer court gardens. The evidence for the purpose of these alterations is in the grand, ornate gardens (see source 8) and the walkway through. The gardens have a geometric shape and lavender and sage bushes. The only problem with the gardens is that they cannot be original. The plants and flowers would've withered every year. There are no fountains or statues but the water pipes leading to the centre of the garden suggests there was a fountain there originally. The evidence of 20th century influence around Leicester's Gatehouse is the toilets. I can see this building was used for entertainment rather than defence because of the ornate door, windows and chimney. There are also no arrow slits and the battlements are artificial and ornate. I know this was a Tudor building from the Tudor rose and the initials either side, "RL". Andrea Thomas. ...read more.