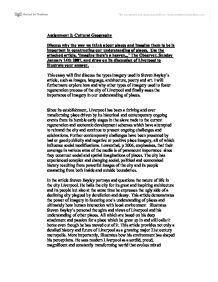 Discuss why the way we think about places and imagine them to be is important in constructing our understanding of places. Use the attached article, Imagine there's a heaven... The Observer, Sunday January 14th 2007, and draw on its discussion of L

Assignment 2: Cultural Geography Discuss why the way we think about places and imagine them to be is important in constructing our understanding of places. Use the attached article, 'Imagine there's a heaven...' The Observer, Sunday January 14th 2007, and draw on its discussion of Liverpool to illustrate your answer. This essay will first discuss the types imagery used in Steven Bayley's article, such as images, language, architecture, poetry and art. I will furthermore explore how and why other types of imagery used to foster regeneration process of the city of Liverpool and finally asses the importance of imagery in our understanding of places. Since its establishment, Liverpool has been a thriving and ever transforming place driven by its historical and contemporary ongoing events from its humble early stages in the slave trade to the current regeneration and economic development schemes which have attempted to rebrand the city and continue to present ongoing challenges and celebrations. Further contemporary challenges have been presented by bad or good publicity and negative or positive place imagery, all of which influence social modifications. Lowenthal, p 2006, emphasises, that their coverage in various arms of the media is of paramount importance since they construct social and spatial imaginations of places. The city has experienced complex and changing social, political and economical history resulting from powerful images of the city and its people emanating from both inside and outside boundaries. In the article Steven Bayley portrays and questions the nature of life in the city Liverpool. ...read more.

The environment Tuan believed played a major role in provoking the diverse reactions of people and their surroundings. Tuan then followed on with his argument by saying that a personal and lasting appreciation of landscape came about when mixed with the memory of human incidents or when aesthetic pleasure is combined with scientific curiosity as an awareness of the past is important in creating the love of place, usually at a local level. Tuan saw place as the joining between the senses of position in society and the senses of identity to your homeland that arises from living in and associating yourself with it. Tuan states that 'place' does not have a geographical scale or map reference associated with it, he sees place as areas in which people find themselves in, and who within these spaces live and interpret their surroundings. Although place is an important aspect in his thinking it must be noted that it does not just arise of its own accord, but instead from 'fields of care'. The idea of fields of care was illustrated in geographical works by humanistic geographer's e.g. Agnew, who refined ideas about space and observed the meaning of place, Agnew identified three major elements of place. The locale i.e. the setting, the location i.e. the geographical location which encompasses the settings and the sense of place i.e. the feeling associated with the area. Tuan's definition associates place with two primary factors, the position held in the society in which you live and the spatial location in which you identify yourself with in that society, but these two elements can and do overlap. ...read more.

This he suggests is because older industries posses more problems such as job insecurities and losses p213New ways of maximising productivity and effectiveness is the construction and use of images ...city managers go to the extent of accepting and constructing fragmented, fictitious, and fleeting images of their beloved city as long as these images enable the cities to grow and enable inward investment.. Ward, V. S P204 Glasgow is an example of a city which challenged preconceptions and made the most of their year in the media spotlight following selection in as city of culture it invested more money in regeneration and cultural industries, by 1990 there was a new concert hall, extensive cleaning and lighting, total spend on the year was 53.1 million compared to an annual 18 million, by end of 1980 investment was successful in attracting tourism, pace of business investment increased creating more jobs Staging sporting spectacles is widely used in most cities as sports events have a popular dimension that makes them relatively easy to justify locally. Also they are a form of local leisure enjoyment as well, can give local entrepreurialism a broader political base and greatly strengthen citizens' commitment to their city The biggest world sport event is the Olympic Games, competition to stage the event is intense....games bring handsome profits and enhance the image of the host city throughout the world The House of commons Committee, "The prospects of the legacy that Games bring are important... ...read more.