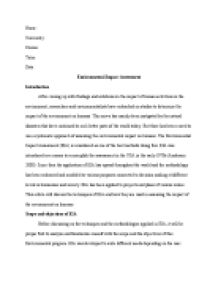 Environmental Assessment. This article will discuss the techniques of EIA and how they are used in assessing the impact of the environment on humans.

﻿Name: University: Course: Tutor: Date: Environmental Impact Assessment Introduction After coming up with findings and solutions on the impact of human activities on the environment, researchers and environmentalists have embarked on studies to determine the impact of the environment on humans. This move has mainly been instigated by the natural disasters that have continued to rock better parts of the world today . But there has been a need to use a systematic approach of assessing the environmental impact on humans. The Environmental Impact Assessment (EIA) is considered as one of the best methods doing this. EIA was introduced as a means to accomplish the assessment in the USA in the early 1970s (Anderson 2000). Since then the application of EIA has spread throughout the world and the methodology has been embraced and modeled to various purposes connected to decision making at different levels in businesses and society. EIA has been applied to projects and plans of various scales. This article will discuss the techniques of EIA and how they are used in assessing the impact of the environment on humans. Scope and objectives of EIA Before discussing on the techniques and the methodologies applied in EIA, it will be proper first to analyze and familiarize oneself with the scope and the objectives of this Environmental program. ...read more.

The objective of the scoping stage is to identify the important items to be included in the EIS, as most consideration is given to those environmental issues that may be significantly affected. When assessing on the impact of natural disasters, the assessors first of all begin by determining the impact to be investigated and carry out the magnitude of the impact and the scope of the affected people in that area of study (Abbasi & Arya 2000). Colombo (1992) lists the aims of scoping as: first, to identify concerns and issues requiring consideration. Here, the main concern concerns are listed first and the order of their necessity follows in that order. Secondly, to aid an efficient EIS preparation process that will be followed by the project team managers and authorities concerned. Third, is to enable those responsible for EIA to properly brief the study team on the alternatives and impacts to be considered at different depths of analysis. This is the most crucial ones as it enables al team member to work under a common goal and also helps to avoid massive external impacts. Fourth, is to provide an opportunity for public involvement where the public will be invited to share their views and ideas that may assist successful completion of the project. ...read more.

Anhava (1994) purported that the legislation most likely demands for environmental reporting when treating permits to activities with large environmental impact. For other types of activities the demand for follow up of the EIA usually is less pronounced. Anhava (1994) argued that monitoring is significant in the process of assessing impacts for it provides assessors with feedback that the measures they have put in place are working or not. From their reports in this monitoring technique, they will now be able to draw up final conclusions of the whole process. Conclusion The Environment Impact Assessment is one of the key methods used by assessors to determine the impact of disasters and events on environmental issues. Having been developed in the late 1970s it is (since then) been the widely used method by environmentalists and assessors due to its effective techniques. The techniques have been endorsed by many researchers and environmentalists all over the world due to their applicability and efficient results. For maximum utilization of the techniques, one has to first understand the scope of EIA and how to apply the techniques and on what context to apply them. This is because EIA has many contexts on which to be used and those wishing to apply it should firs consider seeking proper guidance. ...read more.