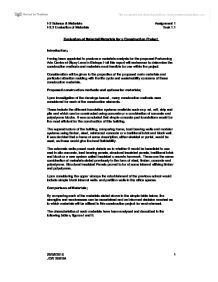 Evaluation of Selected Materials for a Construction Project

Evaluation of Selected Materials for a Construction Project Introduction; Having been appointed to produce a materials analysis for the proposed Performing Arts Centre at Gipsy Lane in Bishops Hull this report will endeavour to determine the construction methods and materials most feasible for use within the project. Consideration will be given to the properties of the proposed main materials and particular attention residing with the life cycle and sustainability concerns of these construction materials. Proposed construction methods and options for materials; Upon investigation of the drawings issued, many construction methods were considered for each of the construction elements. These include the different foundation systems available such as pad, raft, strip and pile and which can be constructed using concrete or a combination of concrete and polystyrene blocks. It was concluded that simple concrete pad foundations would be the most efficient for the construction of this building. The superstructure of the building, comparing frame, load bearing walls and modular systems using timber, steel, reinforced concrete or a traditional brick and block wall. It was decided that a frame of some description, either skeletal or portal, would be used, as these would give the best Buildability. The externals walls posed much debate as to whether it would be beneficial to use cast in situ concrete, load bearing panels, structural insulated panels, traditional brick and block or a new system called Insulated concrete formwork. ...read more.

Insects cannot destroy concrete because it is inorganic and therefore inedible. Because of its hardness insects will not get through concrete As with Concrete, steel is inorganic and therefore inedible to insects and vermin. The three most commonly found wood boring insects in the south coast region of England are the common furniture beetle, powder-post beetle and death watch beetle. Beetles commonly infest timber in construction. The damage is mostly done by the larvae at the beginning of the lifecycle. From egg to larva to chrysalis to adult beetle. The adult beetle then lays its eggs elsewhere and the process is repeated. The larvae burrow through the wood which leaves a fine powder behind. High moisture content is preferred for insects and timber under the influence of central heating is unlikely to be attacked. N/A Frost Attack Concrete is porous unless it is treated to protect it and therefore it absorbs moisture. As water freezes it expands and causes the surface of the concrete to breakaway. N/A N/A As with Concrete, this can occur in bricks and mortar, when the brick is saturated or its pores become filled with water - the water expands and the brick is unable to resist the stresses, which results in the brick crumbling. Sulphate Attack Sulphate Attack on concrete can happen either internally or externally; Internal attack happens when sulphate is incorporated in with the concrete at mixing, for example by using a sulphate rich aggregate or too much added gypsum in the cement. ...read more.

A standard hardwearing concrete pad foundation would be rational selection due to a proven track record. Although other systems of foundations have been discussed, loadings for a building this size have demonstrated to be problematical. The original school is constructed using traditional methods of construction in the form of brick and block, however, whilst from an aesthetic perspective the new building should be consistent in this theme, this will only be achieved by using bricks for the facade. Sustainability; As the previous paragraphs describe, steel is recyclable due to its durability and workability. The suggestion of the frame being steel is a most sensible proposal however, when discussing the external envelope, foundations and roof further analysis may be made of the materials described to ascertain the strengths for each of the functional requirements of each building aspect. For example; in the opening paragraphs of this report, Structural Insulated Panels have been suggested. These panels are assembled from thick Expanded Polystyrene Foam (EPF) sandwiched between Oriented Strand Board (OSB) which is made from fast growing trees. The EPF is made from partially recycled material and they are assembled off-site reducing on site waste by up to 60%. SIPs have been proven to be as, if not more, efficient than other methods of construction regards whole wall R-Value comparison and energy efficiency, making them an overall reasonable choice for the envelope when considered from a sustainability standpoint. ?? ?? ?? ?? H2 Science & Materials Assignment 1 H2.2 Evaluation of Materials Task 1.1 25/05/2010 1 JCW 206184 ...read more.