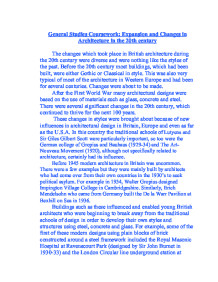 Expansion and Changes in Architecture in the 20th century

General Studies Coursework: Expansion and Changes in Architecture in the 20th century The changes which took place in British architecture during the 20th century were diverse and were nothing like the styles of the past. Before the 20th century most buildings, which had been built, were either Gothic or Classical in style. This was also very typical of most of the architecture in Western Europe and had been for several centuries. Changes were about to be made. After the First World War many architectural designs were based on the use of materials such as glass, concrete and steel. There were several significant changes in the 20th century, which continued to thrive for the next 100 years. These changes in styles were brought about because of new influences in architectural design in Britain, Europe and even as far as the U.S.A. In this country the traditional schools of Lutyens and Sir Giles Gilbert Scott were particularly important, so too were the German college of Gropius and Bauhaus (1929-34) and The Art-Nouveau Movement (1920), although not specifically related to architecture, certainly had its influence. Before 1945 modern architecture in Britain was uncommon. There were a few examples but they were mainly built by architects who had come over from their own countries in the 1930's to seek political asylum. ...read more.

Frank Lloyd Wrights Water House, Pensylvania. Following 1945, the extensive destruction that was experienced during both the two world wars became more noticeable. This required the re-building of entire towns and cities such as London, Swansea and Coventry. As stated, the aftermath, the view of London, following a blitz. However a decade passed and a new problem had arisen. It was not anticipated that the effects of the fast growing use of motorcycles and cars had posed problems in the inner city areas, such as parking and even enforced regulations about driving through city centres were not at all established. Hence in the 1960's and more so in the 1970's there was the introduction of the multi-storey car park. A problem solving expansion, and what seemed to be a good idea has formed into a series of ugly raised buildings littering town and city centres as they still exist today, unchanged. An abandoned multi-storey car park in the inner city of London The changes of the 20th century owed nothing to the previous classical styles of the 19th century, as it had absolutely no links, cultural or structural, with the past. It had started to evolve following the events of World War I and progressed gradually in between the wars, it was then halted at the start of World War II and then exploded afterwards. ...read more.

So this stark simplicity was a characteristic of the time but gradually the architects were able to develop their designs when they learnt to handle the new materials. These concepts of concrete blocks were then abandoned. The concept of steel and concrete producing weight, support and strength as well as far more interesting design enabled the architects ability to 'go to town' with their design. This massive expansion gave architects of the time and capability to experiment with the design of buildings that had not been possible before this time. With housing, the use of brick, stone, wood and slate was not lost, however it had changed. The design and use of these materials became far more individual and creative as opposed to the formality up to the present time. Interiors became more colourful after the 1950's, which in turn, led to the exteriors being painted baby blue or even pink. This was unheard of and would have been frowned upon before that time. In summary, the modern movement led to drastic but very innovative and exciting changes in the 20th century. It expanded to form a new contemporary art form. Architects had 'new toys to play with' and over time produced some spectacular results. It was much a case of trial and error, and there were a few misguided ventures, but resulted in many more exciting and impressive developments. ?? ?? ?? ?? ...read more.