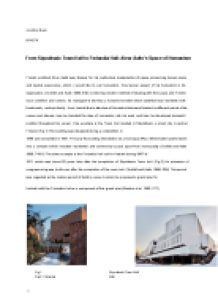 ï»¿Jonathan Boyle 0510276 From Säynätsalo Town Hall to Finlandia Hall: Alvar Aalto’s Space of Humanism Finnish architect Alvar Aalto was famous for his meticulous manipulation of space concerning human scale and spatial experience, which I would like to call humanism. One typical aspect of his humanism is his regionalism. (Schildt and Aalto 1998, 8-9) Combining modern method of dealing with the space and Finnish local condition and culture, he managed to develop a humanist solution which satisfied local residents both functionally and spiritually. Here I would like to take two of his works that were finished in different period of his career and discuss how he blended the idea of humanism into his work and how he developed humanist solution throughout his career. One example is the Town Hall located in Säynätsalo, a small city in central Finland. [Fig.1] This building was designed during a competition in 1949 and completed in 1951. Primarily the building intended to be a municipal office. While Aalto transformed it into a complex which included residential and commercial space apart from municipality. (Schildt and Aalto 1998, 74-81) The other example is the Finlandia Hall built in Helsinki during 1967 to 1971 which was about 20 years later after the completion of Säynätsalo Town Hall. ...read more.

By inserting a courtyard in the center, he skillfully created a balance between solid and void, reducing the tension to a great extend. [Fig.4] The largest compound was subdivided as well. According to certain function of the space, the compound was divided into three main areas which were either separated by walls or linked by small entrances. This manipulation at the same time ensured that users would be movable mostly inside certain functional area without distracted by other unrelated space. (Aalto et al. 1973) Fig.4. The central courtyard and three main functional areas While for the Finlandia Hall, since it is more of a monumental architecture, it was unavoidable that the hall was built into one single large building rather than a complex of several smaller buildings. But Aalto tactfully continued the idea of dispersing the space inside the large massing. The boundary of massing defined an edge which can be regarded as a container of interior space. Inside this container Aalto dispersed concert hall, music hall and congress wing into three relatively isolated spaces. [Fig.5] Large public space which functions as traffic space simultaneously were set in between these isolated spaces as connectors. ...read more.

Typically, in Säynätsalo Town Hall, the office for municipality only occupied a corner of the complex. Council chamber which functions as a gathering space for people to discuss city affairs reached the highest point. Other spaces were spared to residential, banks, library and shops, which were all related to each citizen’s daily life. Also, we can find prototype for the central courtyard from the plaza of ancient Greek city-states. Similarly, in ________________ Finlandia Hall, the congress wing was only a small part of the building with the same height as the horizontal massing. Besides, the construction was divided into two periods with the congress wing being built later than the main hall, which also indicated the reduction of political space’s importance. Fig.11. Three main functional areas in Säynätsalo Town Hall In conclusion, Aalto has been sticking to the idea of humanism through his career. He managed to penetrate humanist solutions of space despite of different context and various problems to be solved. It was these thoughtful details based on human experience and sensations that made his buildings attractive and immortal. And in my personal view, it was his humanism that made him distinctive from other modern architects. Human-based design shall be continued and advocated today as well since architecture is made by human and in return has the goal to give human a better life. ...read more.