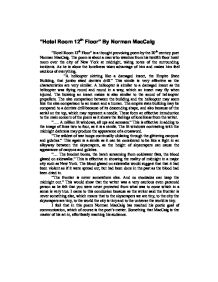 "Hotel Room 12th Floor" By Norman MacCaig "Hotel Room 12th Floor" is a thought provoking poem by the 20th century poet Norman MacCaig. The poem is about a man who watches from his twelfth floor hotel room over the city of New York at midnight, taking notes of the surrounding incidents. As he is alone the loneliness takes advantage of him and makes him feel cautious of everything. "A helicopter skirting like a damaged insect, the Empire State Building, that jumbo sized dentists drill." This simile is very effective as the characteristics are very similar. ...read more.

These form an effective introduction to the main concern of the poem as it shows the feelings of loneliness from the writer. ".... A million lit windows, all ups and acrosses." This is effective in adding to the image of lines two to four, as it is a simile. The lit windows contrasting with the midnight darkness may produce the appearance of a crossword. "The wildest of war hoops continually ululating through the glittering canyons and gulches." This again is a simile as it can be considered to be like a fight in an alleyway between the skyscrapers, as the height of skyscrapers can cause the appearance of canyons and gulches. ...read more.

"The frontier is never somewhere else. And no stockades can keep the midnight out." This would show that the writer was a very cautious even paranoid person as he felt that you were never protected from what was to come which in a sense is very true. I came to this conclusion because as the writer said the frontier is never something else, which means that to the skyscrapers we are tiny, to the city the skyscrapers are tiny, to the world the city is tiny and to the universe the world is tiny. I feel that in this poem Norman MacCaig has reached his poetic goal of communication, which of course is the poet's metier. Something that MacCaig is the master of his art in, effortlessly reaching his audience. ...read more.