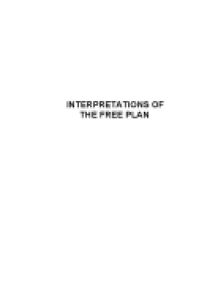 Interpretations of the Free Plan in Modern Architecture.

﻿INTERPRETATIONS OF THE FREE PLAN ________________ TABLE OF CONTENTS Introduction 3 Villa Savoye: Free Plan and Function 3 Barcelona Pavilion: Relationship of Spaces 5 Conclusion 8 Bibliography 9 ________________ INTRODUCTION Some people regarded the free plan as one of the most influential idea in modern architecture. When a floor plan that is free from any load-bearing wall, the interior articulation can be flexible as there are no limitations on the location of wall placed. Architects can therefore manipulate space according to their wish and concepts. In order to achieve the free plan, technology plays a vital role. The use of reinforced concrete and steel made the structure free from any load-bearing walls. The idea of the free plan was first published in Le Corbusier?s ?Five points towards a New Architecture? 1 in 1926. Corbusier envisioned that new architecture?s ground plan should be ?freed?. The supporting systems no longer rely on walls but on other mediums, such as columns. Hence there is ?absolute freedom? in designing the plan, and each floor can be partitioned independently. This declaration was published at the time when Le Corbusier was working on the exhibition in Weissenhof Siedlung, where other architects, such as Mies van der Rohe, were also involved. ...read more.

Le Corbusier had been focusing on the order, ?The plan is the generator. Without a plan, you have lack of order and willfulness.?12 He believed that a free plan is a better organizer of space, as there is no more structural constrains, and any articulation truly reflects its function. To the contrary, Ludwig Mies van der Rohe first questioned about the word ?freedom?. He believed that freedom is not only about articulating the interior freely; it is about the impact and flow of space in a plan, both interiorly and exteriorly. Unlike the Villa Savoye, the aim of the free plan of the Barcelona Pavilion was not to fully accommodate with the function of space. In fact, the Pavilion itself had no defined function. Mies unitized the free plan to give people the freedom for having any program, and the free flow ? or even the fusion of spaces. In conclusion, both architects have their unique definition of free plan, given one is more logical, and the other is more conceptual. Nevertheless, there is not doubt that the concept of the free plan is very influential to buildings and use of spaces today. 12 Le Corbusier, 1920. ?Towards a New Architecture: Guiding Principles?, In: Conrads, ed. 1970. Programs and Manifestoes, pp. 59-62. ...read more.