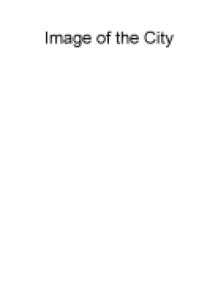 Kevin Lynch - &quot;The Image of the City.&quot; Applying mind mapping to a town on Malta.

﻿Image of the City Daniel Muscat ? B. E. & A. (Hons) Year 3 Semester 2 Every city portrays its own image, which is perceived by its inhabitants and the visitors passing through. This image is created with time, as each individual village, town or city develop, creating their own histories and building their own landmarks. This history gives an identity to the inhabitants of the village, and apart from the general history, each individual will create his or her own history, which will give a whole new meaning to the village. Kevin Lynch discusses this theme in his book ?The Image of the City?, and states how an image is perceived differently by each individual, and a meaning of a place varies from one person to another.[1] This is due to the fact that every individual experiences different aspects of every village, and a place will be perceived differently due to these individual experiences. Charles Jencks states that every settlement is capable of being motivated, and it is this meaning that gives life to a city.[2] Even though the planning of the city is very important in order for the city to be legible, it is the meaning that gives life to the city. Kevin Lynch further develops his studies and divides the city into five elements, which are; paths, landmarks, edges, nodes and districts, which are the main constituents of the image formed by the inhabitants, since it is within these spaces that activities take place.[3] On the same line ...read more.

One element which distinguishes each village is the main landmark, the village church, which defines the skyline of every different village which makes it possible to point out one village from another, and also creates a legible image which helps navigation through each village. It is interesting to see how each village developed according to their traditions and needs. Taking Hal Balzan as an example, it is interesting to see how the villagers chose where to build the new parish. Since the village had two main cores, one around the church of Santa Maria, and one around the church of the Annunciation, which at the time was the parish church, a central plot of land between the two cores was selected in order to reach a balance between the two cores, thus creating a new landmark and node for activities to take place which was accessible for all the inhabitants of the small village.[10] Apart from the landmarks that give the identity to each village, it is also the activity which takes place within a village that gives the identity, as Aldo Rossi states. It is not only the monuments that create a village, thus the actions by the inhabitants are of great importance. Apart from distinguishing the villages by the architecture of the church, every village in Malta can be identified by the village feasts, where the individuality between villages stands out even more. ...read more.

Also from the mind maps analysed, it was shown that the more memories and experiences one has in a place, the more meanings he will create of the space, thus proving further more the argument that the main aim of architecture within a city is to enhance the personal experiences of the inhabitants, and therefore architecture should go around the needs of the inhabitants rather than inhabitants adapting to new evolving architecture. Life without the evolution of architecture would not be interesting, and might not be the same as we know it today, however architecture wihout life will be totally useless since architecture is there to serve the people?s needs, and it is important that we keep this in mind in any project we intend to develop. A place might be special to some persons not because of its architecture only, but also due to the fact that personal experiences created memories, and unlike buildings memories cannot be relived or touched, and therefore a building becomes a monument of those memories, and if that building is destroyed to make place for another building which might be planned in a better way, the aspect of the memories will be lost forever, and as people die, the memories will too. If a building is preserved, the memories created in it will be preserved too and this might be the reason why the local churches and old houses in the old village cores are treasured so much by the local villagers, since they are remains from our ancestors, and it is in the past were we seek our identity. ...read more.