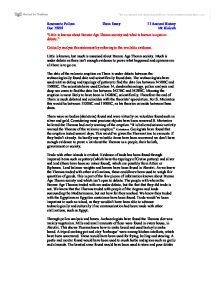 &quot;Little is known about Bronze Age Theran society and what is known is open to debate.&quot; Critically analyse this statement by referring to the available evidence.

"Little is known about Bronze Age Theran society and what is known is open to debate." Critically analyse this statement by referring to the available evidence. Little is known, but much is assumed about Bronze Age Theran society. Much is under debate as there isn't enough evidence to prove what happened and opinions are all there is to go on. The date of the volcanic eruption on Thera is under debate between the archaeologically found date and scientifically found date. The archaeologists have used relative dating and typology of pottery to find the date lies between 1450BC and 1500BC. The scientists have used Carbon-14, dendrochronology, pollen analysis and deep-sea cores to find the date lies between 1627BC and 1629BC. Meaning the eruption is most likely to have been in 1628BC, scientifically. Therefore the end of Thera is much debated and coincides with the theorists' speculation. For S. Marinatos this would be between 1520BC and 1500BC, as his theories coincide between these dates. There were no bodies (skeletons) found and were virtually on valuables found such as silver and gold. Considering most precious objects have been removed S. Marinatos believed the Therans had early warning of the eruption. "It is believed seismic activity warned the Therans of the volcanic eruption." S. Marinatos. Geologists have found that the eruption lasted several days. This would've given the Therans time to evacuate if they hadn't already. As hardly any valuable items have been recovered we don't have enough evidence to prove a lot about the Therans as a people, their beliefs, government or society. ...read more.

Peter Warren agrees that the Admirals fresco depicts a voyage within the Aegean but he suggests the evidence of the town architecture is Theran and that the Therans wouldn't have needed to sail all the way to Africa for " booty". N. Marinatos has another opinion. She believes the Admirals fresco depicts a religious festival, which is celebrating a military victory. Her evidence is the military stylised armour and the women and men standing on a balcony with religious decorations and young men leading cattle show religious significance. She also related this scene to the Harvesters Vase, which depicts rural ritual, as she believes there are similarities between the two. She also believes this is shown in the ships being paddled and not rowed and by the decorations of the fleet. Lastly she believes the festival took place in spring, as the flora and fauna indicates this. Thera are many more interpretations of the Admirals fresco. In fact there are also many names used for it, like the wall frieze and the miniature fresco. In the frescos there are many different hairstyles. Ellen N. Davis believes the hairstyles differentiate status and maturity. She believes that there are six stages between youth and old age. Also that the early stages apply to males. J. V Luce and N. Marinatos thought this wasn't true and that hairstyles were for religious ritual, especially the female hairstyles. As many frescos have been found in places believed to have been religious. ...read more.

N. Marinatos feel the Therans had a very religious culture and that specific rooms had religious purpose. She believed that frescos and artefacts were involved in this religious context too, such as the nude fisherman in room, in the West house. N. Marinatos believes these naked fishermen are "young odorants.... offering (to the Gods)" N. Marinatos. She also believes their nudity and shaved heads are a sign of them belonging to a special religious group. The placing of the frescos in the southwest and northeast corners of the room, facing the corner, where an offering table was found, thereby perpetuating (their offering) forever. N. Marinatos. The crocus gatherers and the Room of the Ladies frescos show a major role, played by the women of Bronze Age Theran society. N. Marinatos believes religion revolved around women in Bronze Age Theran society. Her evidence of this is in the Crocus gathers and the room of the Ladies frescos, which she believes are placed in houses of religious importance. What is known about Thera is taken from Frescos, architecture and the few artefacts there are. This includes trade was evident and what the Therans ate. The little evidence which has been found, can prove some things and not others, because of this most theories are being debated. Each archaeologist and historian has his or her own theories of Bronze Age Theran Society. It is debatable which opinion is true, as more evidence is needed to prove any theory. As little evidence has been found, hardly any theories of Bronze Age Theran Society can be proven. Rosemarie Pollum Thera Essay 11 Ancient History Due 7/9/01 Mr Kinloch ...read more.