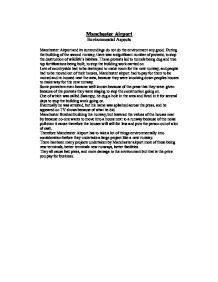 Manchester Airport Environmental Aspects Manchester Airport and its surroundings do not do the environment any good. During the building of the second runway, there was a significant number of protests, to stop the destruction of wildlife's habitats. These protests led to tunnels being dug and tree top fortifications being built, to stop the building work carried on. ...read more.

Therefore Manchester Airport has to take a lot of things environmentally into consideration before they undertake a large project like a new runway. There has been many projects undertaken by Manchester airport most of these being new terminals, better terminals new runways, better facilities. They all cause bad press, and more damage to the environment but that is the price you pay for business. ...read more.