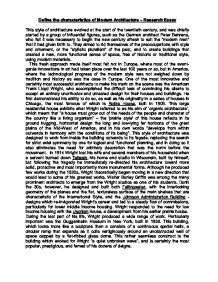 Modern Architecture - This style of architecture evolved at the start of the twentieth century.

This style of architecture evolved at the start of the twentieth century, and was chiefly started by a group of influential figures, such as the German architect Peter Behrens, who felt it was necessary to begin the new century afresh to suit the "modern man" that it had given birth to. They aimed to rid themselves of the preoccupations with style and ornament, or the "stylistic pluralism" of the past, and to create buildings that created a new, more functional sense of space, free of historic or traditional style, using modern materials. This fresh approach made itself most felt not in Europe, where most of the avant-garde innovations in art had taken place over the last 100 years or so, but in America, where the technological progress of the modern style was not weighed down by tradition and history as was the case in Europe. One of the most innovative and certainly most successful architects to make his mark on the scene was the American Frank Lloyd Wright, who accomplished the difficult task of convincing his clients to accept an entirely unorthodox and untested design for their houses and buildings. He first demonstrated his ability to do so, as well as his originality in a series of houses in Chicago, the most famous of which is Robie House, built in 1909. This large residential house exhibits what Wright referred to as his aim of 'organic architecture', which meant that "a house must ...read more.

Due to his early prairie houses, Wright's fame was international by 1910, mostly due to the folio publication of his work in Berlin. By then however, Germany was also approaching the pre-eminent position that it was to hold during the next few decades in terms of architecture and its theory, with such influential figures as Behrens, but also his students such as the German Walter Gropius. This architect was best known for establishing his school of art and architecture at Dessau called the Bauhaus. This school was designed by Gropius himself, in the now more established Modern, or International style, so called since it effectively breached all national and cultural boundaries in its influence. The building is comprised of very simple, geometrical forms and plain undecorated surfaces that is archetypal of the style taught to Gropius by his teacher Behrens, who developed the trends central to Modernism and the Bauhaus itself, together with another architect called Auguste Perret, such as the enthusiastic approach to the use new materials such as open, plate glass, exposed steel, poured concrete, and glass bricks. At the Bauhaus itself, which included such teachers such as Kandinsky and Klee as well as Gropius himself, it was taught that art and engineering should not be separate but should instead benefit each other, and students were encouraged to use their imagination and experiment boldly when it came to design. ...read more.

which he created as "a machine for living in" and which incorporated his trademark five points of architecture, such as the House at Weissenhof, built in 1927. His most influential late work was his first significant post-war structure-the Unite d'Habitation in Marseilles built from around 1947-52. It was a giant, twelve-story apartment block for 1.600 people and the late modern counterpart of the mass housing schemes of the 1920s, similarly built to alleviate a severe post-war housing shortage. The most famous of this architects works, however, lies in America, where, as Gropius, he moved later on in his life- The United Nations Headquarters, finished in 1957, despite not being built solely by Le Corbusier but other American and international architects, the 39 storey Secretariat tower building, as well as the lower part, shows off Le Corbusier's influence and fame throughout the world as one of the finest architect that characterises the Modern Style. The Modern Architecture style evolved from new tastes, new materials, and new advanced technology produced by industrialisation, but most importantly by a new way of thinking, with the start of a new century. The works of artists such as Lloyd Wright, Gropius, and Le Corbusier are just a few most famed which exemplify these innovative conceptions and theories that brushed aside the fictitious 'orders' of the previous centuries and their symmetry and ornament, replacing them with simple outlines of concrete forms, exposed steel beams and vast panes of plate glass. ...read more.