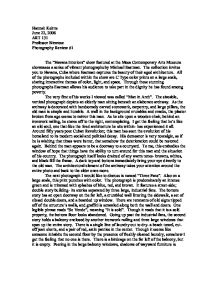 Hannah Keirns June 22, 2006 ART 131 Professor Bimrose Photography Review #1 The "Havana Interiors" show featured at the Mesa Contemporary Arts Museum showcases a series of vibrant photographs by Michael Eastman. The collection invites you to Havana, Cuba where Eastman captures the beauty of their aged architecture. All of the photographs included within the show are C Type color prints on a large scale, sharing interactive themes of color, light, and space. Through these stunning photographs Eastman allows his audience to take part in the dignity he has found among poverty. The very first of his works I viewed was called "Man in Arch". The sizeable, vertical photograph depicts an elderly man sitting beneath an elaborate archway. As the archway is decorated with handsomely carved stonework, carpentry, and large pillars, the old man is simple and humble. A wall in the background crumbles and cracks, the plaster broken from age seems to mirror this man. ...read more.

There are remnants of old signs ripped off of the structure's walls, and graffiti is scrawled along both the wall and doors. One legible phrase reads "Se Vende", meaning "It is sold". Though it reads that it is a sold property, the bottom floor looks abandoned. Going up past the industrial fans, the second story holds a balcony enclosed by another ironwork railing and three large windows that span up the entire story. There is a single line of laundry out to dry- a beach towel, cut-off jean shorts, and a pair of red, satin panties in the center. Though it seems like someone inhabits the second floor by the presence of freshly cleaned laundry, somehow I get the feeling that no one is there. There is a birdcage on the far left of the balcony, but it is empty. Peering in the large balcony windows, shadows of wayward furniture is visible, but no humans can be seen. ...read more.

The dull, deteriorating appearance of this space gives the imagination room to wonder what this large space might have been used for in the past, what great events and parties it held, and the residents of the space were like. The room changes slightly over a year's time in Eastman's "Isabella's Two chairs 2000". A solitary line of laundry brings life to the otherwise dead interior. The suggestion that from a year ago, someone is living in this space can also be seen in the set of chairs. Once overtaken by the large light fixture and off-centered, the chairs have taken on a new function in this photograph- facing inward toward each other and placed in the middle of the room. The irony of this "newer" photograph is that even though you get the notion that someone has moved into the old space, it is still rundown, and falling apart. This brings light to the poor situation of the country and its ability to remain vintage and unkempt in the modern world. ...read more.