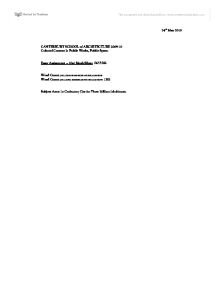 24th May 2010 CANTERBURY SCHOOL of ARCHITECTURE 2009-10 Cultural Context 2: Public Works, Public Space. Essay Assignment - Ajay Singh Sihra; 0653286 Word Count (INCLUDING REFERENCES AND BIBLIOGRAPHY): Word Count (EXCLUDING REFERENCES AND BIBLIOGRAPHY): 1282 Subject Area: Le Corbusier; City for Three Million Inhabitants. 'Using Le Corbusier's unbuilt proposal, A Contemporary City of Three Million, examine its relationships to underlying ideologies about forms of public life.' "A town is a tool. Towns no longer fulfil this function. They are ineffectuai; they use up our bodies, they thwart our souls. The lack of order to be found everywhere in them offends us; their degradation wounds our self-esteem and humiliates our sense of dignity. They are no longer worthy of age. They are no longer worthy of us." (Corbusier 1929.) 1 A city! It is a grip of man upon nature. It is a human operation directed against nature, a human organism both for protection and work. It is a creation. Poetry also is a human act- the harmonious relationships between perceived images. AI1 the poetry we find in nature is but the creating of Our own spirit. A town is a mighty image, which stirs our minds. Why should not the town be, even today a source of poetry? ...read more.

"I relied on the sure paths of reason," Le Corbusier wrote of his design, "....and having absorbed the romanticism of the past, I felt able to give myself up to that of our own age, which I love. My friends, astonished to see me so deliberately passing over immediate considerations, said, all this is for the year two thousand! Everywhere journalists wrote of it as the city of the future. Yet I had called it a Contemporary City. Contemporary because tomorrow belongs to nobody." 4 You can look at Le Corbuiser's city and say that he was building on foundations already established by the French urbanist Eug�ne H�nard. H�nard's Etudes sur les transformations de Paris (Studies on the Transformations of Paris, 1903-9) promoted the segregation of pedestrians and vehicular traffic with the use of setback apartment blocks and flanking wide avenues. This idea is apparent throughout Le Corbusier's design and has been taken further in grouping people by wealth, class or working status throughout the city. Le Corbusier's City for Three Million was, like many of his creations, predicated on the idea that modern cities could only function with efficiency and order at the heart of the city. Believing that one's priority should be efficiency followed by gracious aesthetic design. ...read more.

All of his base ideas of order, concentration yet open, centrality, congestion free with ease of mobility and light are exactly what people dream of when contemplating the idyllic city. Yet by accomplishing the perfect foundations the structure has suffered and consequently is completely the opposite of personal views and opinions. The complete lack of originality and individuality, with design and imagination erased, forcing people to live in what could appear to be a communistic city and communistic way. Where is there room in Le Corbusier's design for free will and freedom of speech? We would be conformed to follow protocol in a city such as this, rather than a space for living and inhabiting, it almost becomes a farm like system. We are herded like cattle into the hypnotic repetition almost rendering ourselves drones rather than living people. By creating a perfectly systematic city he has devolved the ideas of change and evolution that we come to expect from the passing of time and trends. It appears Le Corbusier would have us living in an un-evolving city forever. Ultimately it boils down to the imperfections not in the design of his city but the apparent ones of human nature. It is our own ideas of difference, likes and dislikes that would not allow us to function fully within this city. ...read more.