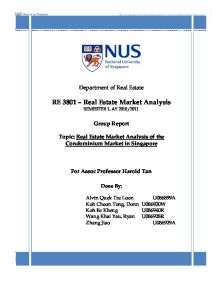 Department of Real Estate RE 3801 - Real Estate Market Analysis SEMESTER 1, AY 2010/2011 Group Report Topic: Real Estate Market Analysis of the Condominium Market in Singapore For Assoc Professor Harold Tan Done By: Alvin Quek Tze Loon U086899A Koh Choon Tong, Donn U086930W Koh Ee Kheng U086940R Wang Khai Yau, Ryan U086928R Zhang Jiao U086929A Executive Summary Overview of Singapore Market Outlook and her Positioning The Singapore economy has bottomed up and gradually recover since 2Q 09. The low unemployment rate, GDP, attractiveness factors continue to be a magnet in attracting MNCs to set up their headquarters here. The expatriates and foreigners which follow will drive up both the rental and sales demand. Given the excellent investment climate in Singapore - strong financial fundamentals and political stability, this upward demand trend is likely to continue for at least the next 5 years. Above all, Singapore is top in corporate governance among all other Asian countries, displaying the determination of the government to do whatever it takes to make sure it remains competitive in the region. Government Regulations and our Views on the Recent Cooling Measures It is in our view that the recent rounds of cooling measures are targeted at speculators who are manipulating the economy recovery as an opportunity to flip properties, resulting in price irrationality, causing a potential unsustainable property bubble. This may have negative connotations to the property market. We believe that the measures will affect sales in the private mass market projects as intending HDB upgraders have to fork out higher cash outlay. However, the measures would help maintain a stable and sustainable property market in Singapore, which proves to be beneficial for all genuine buyers, local and foreigners alike. We are recommending New Homes to cater to the luxury condominium sector and analyses will be further elaborated in the subsequent sections. 5 Condominium Subsectors in Singapore The condominium market in Singapore could be broadly classified into 5 subsectors, namely, the Mass Market (lower middle), the Upper Middle Class, Executive Condominium (EC), the Luxury and the Super Luxury. ...read more.

The more prominent deals included the purchase of Goodrich Park and Meng Garden (CBRE Singapore MarketView 3Q10). Wing Tai, a luxury property developer, remains upbeat despite Singapore residential property recent measures. The Straits Times September 6, 2010 had reported strong demand for high-end properties in Singapore. Wing Tai deputy chairman Edmund Cheng said that the new curbs like 70% cap on loan-to-property-value for second mortgages will not affect the rich. He added that the measures may affect HDB upgraders but not the upper middle, high-end and super high-end. Thus, Wing Tai continues their optimistic view by announcing that they will continue to launch high-end residential projects. Population Growth and Fertility Rate Table 15: Singapore Population Size and Growth by Residential Status Source: Population Trends (2010) Figure 6: Total Population Average Annual Growth Rate Source: Population Trends (2010) Based on historical data for the past ten years (Table 15), the overall population does not reflect a steady growth rate. Instead, it is growing at a decreasing rate since 2008 (Figure 6). Further analysis suggests that the sharp decrease is mainly due to the reduction of non-residents due to the tight control over migrants. While for citizens, the policies in encouraging marriages and producing babies are not effective or have not yielded visible results, as reflected by the decreasing fertility rate in Singapore (Table 16). Table 16: Fertility Source: Population Trends (2010) In 2007, National Development Minister Mah Bow Tan (Lin, 2010) announced that the predicted future population of Singapore would hit 6.5 million by year 2050, of which about 40% of the total population would be made up of migrants. Thus, to project the population for 2011 - 2014, the average population growth of 35,580 each year is adopted in order to hit the 6.5 million by the year 2050 from 5 million in 2010. The assumption here is that population is growing at a constant rate for the next 40 years. ...read more.

As a result, foreigners are making Singapore their home and, therefore, investing in buying flats and condominiums, with some even becoming PRs to enable themselves to purchase landed property. With the economy picking up and the return of market confidence, Singaporeans too are looking to more increased prestige and affluent type of living particularly from the higher-income individuals and household and long-term investors. Foreigners have often been lured here due to the ease of doing business, political stability, ideal geographical location and efficiency. Besides, Singapore has also managed to successfully reinvent itself to a buzzing place especially with recent events like the Formula One and the opening of its two new IRs- Marina Bay Sands and Resorts World Sentosa. This has helped put our city on the world map and on the radar of foreign investors and Singapore proved to be one of the hottest real estate markets in the world, attracting the rich from far and beyond. We are confident that the Singapore property market, particularly the luxury segment, will continue to create value for home owners and investors in the long term and the cooling measures are in line with the government's long horizon objectives to maintain a stable and sustainable property market. This sustainability provides the reason for us to be upbeat on the property market given that Singapore's economic fundamentals remain strong and steady. With the recent string of host events, Singapore can expect more MICE (meetings, incentives, conventions and exhibitions) business and visitor arrivals. Upcoming projects and events will further position Singapore as a wealth management hub and a global city which will in turn draw more PRs and foreign investors into this tiny red dot island on the map. The cooling measures have no doubt injected uncertainty in the market. However, we also expect that the high-end residential market would not be severely hit by the government measures due to the reasons that were mentioned earlier in the report. Hence, demand for high-end property should remain buoyant because of investors' liquidity, dynamic demographic and expected low interest rates for the next few quarters up to Year 2012. ...read more.