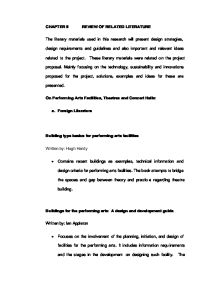 CHAPTER II REVIEW OF RELATED LITERATURE The literary materials used in this research will present design strategies, design requirements and guidelines and also important and relevant ideas related to the project. These literary materials were related on the project proposal. Mainly focusing on the technology, sustainability and innovations proposed for the project, solutions, examples and ideas for these are presented. On Performing Arts Facilities, Theatres and Concert Halls: a. Foreign Literature Building type basics for performing arts facilities Written by: Hugh Hardy * Contains recent buildings as examples, technical information and design criteria for performing arts facilities. The book attempts to bridge the spaces and gap between theory and practice regarding theatre building. Buildings for the performing arts: A design and development guide Written by: Ian Appleton * Focuses on the involvement of the planning, initiation, and design of facilities for the performing arts. It includes information requirements and the stages in the development on designing such facility. The literary contains background information about prevailing issues on various building types, and also dealt with identifying roles of the client, consultants, the stages to be achieved, with considerations of building use. Theatre Technology Written by: George C. Izenour * The literary contains recent innovations on theater technology by the eminent theater designer George C. Izenour. It focused on discussing how to allow spaces to be flexible depending on its use. Performance architecture + design Written by: Chris van Uffelen * Focused on how acoustics and stage mechanisms adjust to modern requirements, while the standards of technology and the amenities for visitors are improved. The author gave more emphasis on innovations and technologies through lighting and acoustics for theaters, concert halls and opera houses which belong to the main building tasks of our times. Theatre Buildings: A design guide Produced by: Association of British Theatre Technicians * Took account of the development of new technologies, new forms of presentation, changing expectations and the economic and social pressures which require every part of the theatre to be as productive as possible. ...read more.

It explains the adaptation and creation of new technologies and materials and to borrow ways of working from other disciplines, to focus on innovation rather than incrementally increasing performance or efficiency. CASE STUDIES Local Case Studies: * Newport Performing Arts Theatre, Resorts World Manila Newport Performing Arts Theater, showcases the best of in-house productions that can be seen nowhere else. A home to major productions such as Broadway musicals, concerts and pageants, Newport Performing Arts Theater is where the enchantment unfolds. * Cultural Center of the Philippines (Sentrong Pangkultura ng Pilipinas) The fa�ade of the National Theater is dominated by a two-storey travertine block suspended 12 meters high by deep concave cantilevers on three sides. The rest of the structure is clad in concrete, textured by crushed seashells originally found on the reclamation site.The building is built on a massive podium, and entry is through a vehicular ramp in front of the raised lobby and a pedestrian side entry on its northwest side. In front of the fa�ade and below the ramp, there is an octagonal reflecting pool with fountains and underwater lights. On the main lobby, three large Capiz-shell chandeliers hang from the third floor ceiling, each symbolizing the three main geographical divisions of the Philippines: Luzon, Visayas and Mindanao. At the orchestra entrance, a brass sculpture, The Seven Arts byVicente Manansala welcomes the audience into the main theater. From the pedestrian entrance, Arturo Luz's Black and White is displayed as spectators enter the little theater or ascend to the main lobby through a massive carpeted spiral staircase. Most of the interior is lit artificially, as there are few windows, most of which are located along the sides of the main lobby. Large areas on the upper floors are open to the ground floor lobby, emphasizing the large chandeliers and fluid interior spaces on northeast side of the building. Galleries and other rooms surround these open areas, occupying the space created by the huge cantilevered block. ...read more.

Indeed many of the principles have been in use since antiquity to moderate the climate in hot, arid regions. The range of possibilities for cooling is considerably enhanced by using seawater. This is a relatively new development, requiring the use of low cost plastics for pipes, pumps and heat exchangers (metals that are adequately corrosion resistant to seawater are generally too expensive for such applications). Gran Canaria has abundant sunshine year round yet with moderate temperatures for its latitude (which is the same as Kuwait). It also lies in close proximity to very deep, cold seawater. Within 4 km of the harbour, the seabed falls rapidly to a depth of 1000 metres, where the water temperature is 9�C. The mean wind speed of 7m/s and NNE direction are remarkably constant year round, and can thus be harnessed to drive the ventilation. These conditions may all be used to provide sustainable and low cost methods of cooling, and the production of fresh water. This energy is renewable, carbon free and unlimited in its abundance, as the cooling process is driven by solar energy evaporating surface seawater, and thermal stratification with depth. If the temperature of an air to water heat exchanger is constantly below the ambient dew point temperature, and if its surface is exposed to the wind, water vapour will condense into fresh water continuously. The rate of condensation increases with increased air temperature and humidity, and there are various methods of augmenting this with solar energy. However, the average temperature in Gran Canaria is around 20�C and rarely falls below 14�C. Relative humidity stays constantly high - above 70% throughout the year. Thus with a cooling temperature of 10�C, fresh water will be produced every day of the year, but with substantially more in summer than in winter. The potential exists to produce fresh water at less cost than any other desalination system and using only renewable energy for the process, with cool air as a free by-product. The water produced is of distilled quality, similar to dew or rain, and does not need any chemical treatment, unlike all other desalination processes. ...read more.