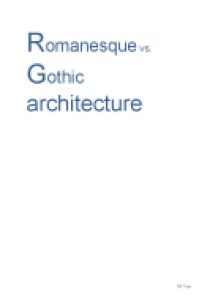 At Durham the pointed arches of the nave vault, 1128-1133, were used for the first time in a high vault. Other characteristics of early Gothic architecture, such as vertical shafts, clustered columns, compound piers, plate tracery and groups of narrow openings had evolved during the Romanesque period. The west front of Ely Cathedral exemplifies this development. Internally the three tiered arrangement of arcade, gallery and clerestory was established. Interiors had become lighter with the insertion of more and larger windows. The Abbey of Saint-Denis is generally cited as the first truly Gothic building, however the distinction is best reserved for the choir, of which the ambulatory remains intact. Noyon Cathedral, also in France, saw the earliest completion of a rebuilding of an entire cathedral in the new style from 1150-1231. While using all those features that came to be known as Gothic, including pointed arches, flying buttresses and ribbed vaulting, the builders continued to employ many of the features and much of the character of Romanesque architecture including round-headed arch throughout the building, varying the shape to pointed where it was functionally practical to do so. At the Abbey Saint-Denis, Noyon Cathedral, Notre Dame de Paris and at the eastern end of Canterbury Cathedral in England, simple cylindrical columns predominate over the Gothic forms of clustered columns and shafted piers. Wells Cathedral in England, commenced at the eastern end in 1175, was the first building in which the designer broke free from Romanesque forms. The architect entirely dispensed with the round arch in favour of the pointed arch and with cylindrical columns in favour of piers composed of clusters of shafts which lead into the mouldings of the arches. The transepts and nave were continued by Adam Locke in the same style and completed in about 1230. The character of the building is entirely Gothic. Wells Cathedral is thus considered the first truly Gothic cathedral. ...read more.

However, gargoyles had another intended purpose: to strike fear into the hearts of ill-educated medieval peasants, scaring them into the church or cathedral. Many gargoyles include elements of the grotesque: exaggerated, evil features or threatening poses, which would have ?leered down from above?. In a world marked with fear and superstition, these creepy creatures would undoubtedly have encouraged many to seek solace and safety inside of a church or cathedral, to be protected from the demons and ghouls which roamed outside. The gargoyle is one of the defining characteristics of gothic architecture, and sticks in the mind even to today. Emphasis on the Decorative Style and the Ornate Gothic architecture marked the first time that beauty and aesthetic values had been incorporated into building design. This revolutionised the way that medieval architects began to think of buildings. Architecture was no longer just functional - it began to have merit and meaning in its own right. Increasingly ambitious and ornate designs of church, cathedral and castle came to be built. Rivalry and competition drew different groups of builders to conceive and construct grander and more decorative designs, for the glory of the Christian reign. ________________ Conclusion To conclude, here is a short list that has been compiled to compare the main difference between the Romanesque and Gothic architectural styles: Romanesque Gothic Radiating chapels and apse Separate compartments Unified, unbroken space Vault Mostly barrel-vaults, some groin-vaults Groin-vaulted cathedrals Arch type Rounded arches Pointed arches Main vault support Thick walls, buttresses Exterior flying buttresses Clerestory Small windows Large stained-glass windows Elevation Horizontal, modest height Vertical, soaring Exterior Plain, little decoration, solid Ornate, delicate, lots of sculptures Sculptural decoration Thin, elongated, abstract figures More realistic proportions and individualised features Mood Dark, gloomy Tall, light-filled, airy These two styles of architecture have revolutionised a number of engineer discoveries as well as pioneered several building techniques. What?s more important about these styles is that, whatever was achieved during their time is still very relevant today, and without such feats, the architecture of today would be very different. ...read more.