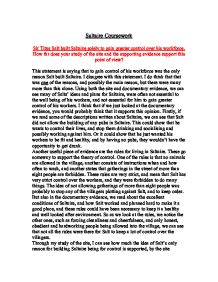 Sir Titus Salt built Saltaire solely to gain greater control over his workforce.How far does your study of the site and the supporting evidence support this point of view?

Saltaire Coursework Sir Titus Salt built Saltaire solely to gain greater control over his workforce. How far does your study of the site and the supporting evidence support this point of view? This statement is saying that to gain control of his workforce was the only reason Salt built Saltaire. I disagree with this statement. I do think that that was one of the reasons, and possibly the main reason, but there were many more than this alone. Using both the site and documentary evidence, we can see many of Salts' ideas and plans for Saltaire, were often not essential to the well being of his workers, and not essential for him to gain greater control of his workers. I think that if we just looked at the documentary evidence, you would probably think that it supports this opinion. Firstly, if we read some of the descriptions written about Saltaire, we can see that Salt did not allow the building of any pubs in Saltaire. ...read more.

So as we look at the rules, we notice the other ones, such as forcing cleanliness and cheerfulness, and only honest, obedient and hardworking people being allowed into the village, we can see that not all the rules were there for Salt to keep a lot of control over the villagers. Through my study of the site, I can see how much the idea of Salt's only reason for building Saltaire being for control is supported, by the site evidence. Firstly, I studied the almshouses. Salt didn't have to build these-he chose to. From looking at them and taking pictures, I noticed that they were quite impressive. They were there for retired workers of the mills, who had no family. They were fully bricked, and looked like they had had no renovations up to date, which showed they were well built. They were superbly situated- opposite the hospital (old were prone to illnesses), set in an area of open space, and on the edge of the village. ...read more.

for ages nine and up. By law, Salt did have to provide some form of education, but he did not have to build the school-this was his own idea. Salt was an extremely religious person, and he built a church In Saltaire. It is situated directly opposite the mill, to encourage church going. The hospital was extremely well built, and needed no work or improvements, and could even take the third storey, which was recently added. All of this site evidence shows that Salt provided many luxuries and things to make life comfortable for the villagers, and made it a nice place to live. He provided many more things that he did not need to if his only objective was to gain control of his workers. So the evidence gathered shows that control was not his sole intention. However, it definitely was one of his reasons for building Saltaire. This is because the rules were very strict, he provided no pubs, and also in the village there is a watchtower on Titus Street. Salt or some of his highest workers will have used this to keep an eye on the villagers. ...read more.