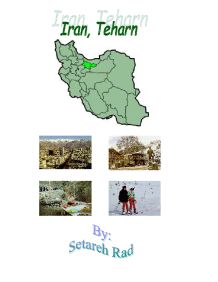 Tehran is the capital and largest city of Iran and is also the most populous city in the Middle East. Tehran is one of the world's most fascinating cities located on the slopes of the Alborz Mountains Chain at an elevation of about 1210 m. The Damaavand Peak (5671 m high) can be seen from every point of the city. A unique civilization and Islamic heritage that has flourished for over 25 centuries offers to visitors a distinct charm of oriental traditions. Tehran is also the capital of Iran with residents numbering well over 10 million, occupying about a sixth of the total population of Iran. All the main stream of politico-economical and cultural activities runs into and out of Tehran, which makes it a very colourful city encompassing a variety of elements. Tehran is a metropolis where roads and cultures come together. Palaces in the north and centre of downtown Tehran provide an opportunity to relive great moments in the city's history and to expose the visitor to a rich architectural heritage. Downtown Tehran is rich in exclusive shops, bazaar, galleries and museums. The bustling northern part of the city is alongside the fantastic natural setting of magnificent mountains and the spectacular Damaavand Peak. Tehran, located in the northern part of the country. Tehran is Iran's administrative, economic, and cultural centre as well as the major industrial and transportation centre of the region. The climate has marked seasonal contrasts, with short springs and autumns separating cold winters and hot, dry summers. Average annual precipitation is around 230 mm (9 in), again with notable differences between the northern suburbs (393 mm/16 in) and the lower southern areas (93 mm/4 in). It is possible that it may date back to the ninth century AD, but for the first few hundred years of its existence it was an insignificant town, its development being retarded by its proximity to the larger and flourishing Rey (now 7 km to the south of Tehran). ...read more.

It is an intricate composition rather like a wallpaper design of the beginning of the century, with streamers and bouquets surrounding shields bearing minutely portrayed landscape and country scenes. Actually there are few religious buildings of great importance in Tehran, but visitors not travelling outside the capital, should on no account miss visiting at least one mosque, so this recent one is at least worth mentioning. Funds for its construction were provided by the enormously rich Mirza Hossein Khan, who had been in turn Nasser od-din Shah`s Grand Vizier, Minister for Foreign Affairs and Commander-in-Chief (Sepah Salar). Built on the traditional four-Ivan plan round a large, arcaded court, the mosque was not completed until 1890. Its large prayer hall has 44 columns, and the top of one of its minarets was once one of the vantage points to see the new Tehran and the Alborz Mountains. The southwest van leads into the spacious domed sanctuary chamber which has been re-tiled in and outside, during recent decades and now provides an excellent example of contemporary Iranian tile work, both haft rangui and mosaic. The northeast Ivan opposite is surmounted by a tiled clock tower and flanked by a pair of small minarets. The scrupulous restoration carried out recently shows that modern craftsmen are as skilful as their ancestors were. The Mosque's library houses over 5,000 manuscripts, some of which are unique. At present students of theological sciences carry on with their courses here. Address: Southern end of eastern side of Baharestan Square, downtown Tehran. Niavaran Palaces The compound of Niavaran palaces in Tehran was formerly the residence of the Qajar kings and at present the Saheb Gharanieh palace and Ahmad Shah palace remain from that period. It was during the reign of Pahlavi dynasty when this collection was extended and some palaces including the main Niavaran and royal school were annexed to it. The building of Niavaran palace, with an area of some two thousand square meters, started in the centre of a garden in 1948 and was completed in 1967. ...read more.

Laleh International Hotel (Dr Hossein Fatemi Ave) located on a corner of Park-e-Laleh is a case in point. Once the InterContinental, it's a little past its prime but still offers comfortable rooms and a wide range of travel services. The government-owned Homa Hotel (51 Khodami St) chain is often referred to as 'the ex. Sheraton Hotel' by locals. Unfortunately it's located in the quieter northern suburbs of the city, around 1.5 km north-west of Vanak Square. Hotel Simorgh just by the Shafagh Park,just before Tavanir,is well-maintained and recently refurbished hotel.Could be a bit expensive but has been done up by the group of Hotel Management students. Contact Internet Ferdosi Coffee Net (Enghelab Ave, a few doors east of Ferdosi Square) is hard to find (look for the small sign plastered to a building) has two banks of computers for IR 8,000 an hour. Pars Net is one of south Tehran's hottest coffee nets, dishing up reasonable speed for IR 9,000 an hour. It is on the eastern side of Ferdosi St, between Jomhuiyeh Eslami Ave and Enghelab Ave, across from the British embassy. They also provide fax and long distance phone services. Stay safe Tehran is still a relatively safe city to travel through, particularly considering its size. Common sense and the usual precautions against pickpockets in bazaars and crowds should ensure your visit is hassle free. Even late at the mid-night is quite safe in most parts of the city while you will find the city still crowded. It is advisable not to take a private taxi for instance at 2:00 AM. The fake police that target Esfahan's tourists have also found their way to Tehran in recent years. These are usually uniformed men in unmarked cars flashing phoney IDs are requesting to see you passport or search your luggage. It goes without saying that you should just ignore such requests and head to the nearest police station if you feel unsafe. The trouble is that it can be very hard for the untrained tourist eye to tell these from the real police. ...read more.