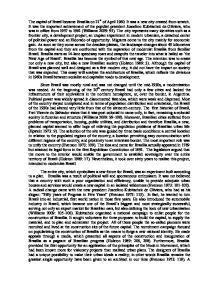 The capital of Brazil became Bras�lia on 21st of April 1960. It was a new city created from scratch. It was the important achievement of the populist president Juscelino Kubitschek de Oliviera, who was in office from 1957 to 1961 (Williams 2009: 95). The city represents many identities such as a frontier city, a development project, an utopian experiment in modern urbanism, a detached center of political power and an Eldorado of opportunity. Migrants come to the city mainly for economic gain. As soon as they come across the desolate plateau, the landscape changes about 40 kilometers from the capital and they are confronted with the separation of modernist Bras�lia from familiar Brazil. Bras�lia starts as 14-lane speedway roars and catapults the traveler into what is hailed as �the New Age of Brazil�. Bras�lia has become the symbol of this new age. The intention was to create not only a new city, but also a new Brazilian society (Holston 1989: 3). Although the capital of Brazil was planned well and designed as a first modern city, it did not have the impact on society that was expected. This essay will analyze the architecture of Bras�lia, which reflects the divisions in 1960s Brazil between socialist and capitalist roads to development. Since Brazil was mostly rural and was not changed until the mid-1930s, a modernization was needed. At the beginning of the 20th century Brazil had only a few cities and lacked the infrastructure of their equivalents in the northern hemisphere, or, over the border, in Argentina. ...read more.

Another part of the Pilot Plan is Esta��o Rodovi�ria (central bus station), which is sometimes overlooked, literally, because in some sense it is actually subterranean. L�cio Costa did not put the government buildings at the heart of the city, instead he put a transport hub, which was the centre of both the city�s public transport network and its highway network. It is a building about movement and speed, connected to the modernized Brazil that the new capital was supposed to represent. The city is conceived as fundamentally mobile; the spaces themselves are undemonstrative, flexible, designed for the rapid movement of people and vehicles. (Williams 2009: 97-99). The city became an image of the car industry, because it replaced the historicist villas of the bourgeoisie with high-rises and freeways and underpasses (Williams 2009: 106). Moreover, Bras�lia is the city without street corners and crowds. The absence of the traditional streets themselves is one indication of a distinctive and radical feature of modern urban organization. In place of the street, Bras�lia substitutes high-speed avenues and residential cul-de-sacs; in place of pedestrian, the automobile; and in place of the system of public spaces that streets traditionally support, the vision of a modern and messianic urbanism. It forced people to stay in their apartments and replaced the spontaneity of street encounters with the formality of home visits. This interiorization of social life had the effect of restricting and ultimately constricting Bras�lia�s social universe (Holston 1989: 101, 107). ...read more.

They found the street life "cold". As a result they tried to �familiarize� this utopian city by putting their shops back on the street, in contact with curbs and traffic. Many bureaucrats moved out of the center, preferring to build individual houses that show off the residents� wealth, status and negate the modernist aesthetic. According to people�s evaluation Bras�lia is quite seductive and its practical advantages come to outweigh its defamiliarizations, but what resulted was not of course the old Brazil, but neither was it the imagined city (Holston 1989: 24-25). To conclude, Bras�lia was conceived as a model city, a constructed image, not of existing Brazilian conditions, but of the future of Brazil. It was also a critical utopia as an image of a future radically different from the present. Bras�lia�s planners called it �the capital of the twenty-first century� not because they thought its design futuristic in any phantasmagoric sense. It represented for them a set of solutions to immediate development objectives that constituted a blueprint of how to get to a possible future (Holston 1989: 84-85). Bras�lia is not exactly a human settlement surrounded by its history; it might indeed actually appear as unimaginative and inhumane aspects of modern civic design. According to the Italian critic Bruno Zevi, "It is a city of Kafka". Bras�lia presents the vision of a totally man-made environment. Although it was critized in the past, its physical image with its wide roads, uniformly modern buildings, vast monument axis, and dramatic government complex, has become as well-known known a symbol of Brazil as the statue of Christ on Corcovado (Evenson 1973: 103-104). ...read more.