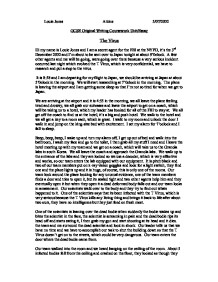 Louie Jones Atkins 5/07/2002 GCSE Original Writing Coursework Unit/Essay The Virus Hi my name is Louie Jones and I am a secret agent for the FBI at the NYPD, it's the 3rd December 2002 and I'm about to be sent over to Japan tonight at about 9'0clock. A few other agents and me will be going, were going over there because a very serious incident occurred last night which evolved the T Virus, which is very confidential, we have to research and put a stop to the virus. It is 8:58 and I am departing for my flight to Japan, we should be arriving at Japan at about 5'0clock in the morning. We will start researching at 7'0clock in the morning. The plane is leaving the airport and I am getting some sleep so that I'm not so tired for when we get to Japan. We are arriving at the airport and it is 4:55 in the morning, we all leave the plane feeling tired and drowsy, we all grab our suitcases and leave the airport to get on a coach, which will be taking us to a hotel, which my leader has booked for all of the FBI to stay at. ...read more.

It is pitch black and two of our team members put on x-ray vision goggles and look for a light switch, they find one and the place lights up and it is huge, of course, this is only one of the rooms. Our team look around the place looking for any unusual evidence, one of the team members finds a door and tries to open it, but its sealed tight and two other agents help him and they eventually open it but when they open it a dead deformed body falls out and our team looks in amazement. Our scientists walk over to the body and they try to find out whats happened to it. One of the scientists says that its been infected with the T Virus, which is very serious because the T Virus kills any living thing and brings it back to life after about two ours, they have no intelligence but they just feed on fresh meet. One of the scientists is leaning over the dead bodie when suddenly the bodie wakes up and bites the scientist in the face, the scientist is screaming in pain and the dead bodie rips its head off and starts eating it, I then grab my gun and start shooting at its head and it dies. ...read more.

We entered the queen's chamber, there was only 4 of us left because the others were killed by the infected bodies. We started to shut the building down by putting the TX decoder into the queen's lock system and it worked fortunately. We started to leave the building but on our way we encountered infected bodies, we got out our guns and started shooting at them unfortunately the infected bodies got a hold of 2 of our team members, me and my other team member Dr Cole started to leave the building. We reached the exit but the door was locked and we had 2 minutes until the building would shut down, we tried to look for a decoder but we couldn't, I tried shooting at the lock, which worked and the door opened and we jumped through the door with 3 second to go, but Dr Cole got caught on the door and the doors closed, I tried opening the doors but they wouldn't. I was glad that I got out but sad for the other team that didn't make it. I was relieved that I got out and I went home. ...read more.