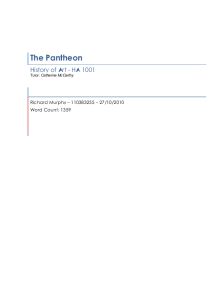 This essay shall analyze the Pantheon, paying particular attention to the construction details, mainly the entrance and dome, as well as the buildings form and function.

(A)CHECKLIST * Artist: Unknown * Title: The Pantheon * Type of Work: Architecture/Building * Materials: Granite, Marble, Concrete, Wood, among others * Date: 137 AD * Patron: Unknown * Location: Rome, Italy (B) CRITICAL EVALUATION For many people, the world over, the Pantheon is just another stop on Rome's famous tourist trail. When considered amongst Rome's other architectural wonders, it is understandable that the significance of the Pantheon is sometimes overlooked. However, if one stops and takes a closer look it soon becomes evident that the Pantheon is an ancient building of immense significance, "inspiring much emulation, commendation, and some say even fear."1 This essay shall analyze the Pantheon, paying particular attention to the construction details, mainly the entrance and dome, as well as the building's form and function. Although we do not know the identity of the Pantheon's architect, we can safely say that he was a perfectionist, and a genius. ...read more.

For many people the Pantheon is synonymous with ancient Rome, and for good reason too. The design of the Pantheon is typically and uniquely Roman, with the great building's domed half sphere roof being one of its most recognizable features. The fact that the domed roof is an architectural feature associated with Rome was of great insult to the ancient Greeks, as they never quite mastered the art of dome building. The Romans, unlike the Greeks, realized that the secret to the construction of the dome is in the use of high quality cement. As Robert and Hutchinson explain, "Unlike simple mortar which is produced by adding water to a mixture of quicklime and sand, and sets when all the water has been evaporated into the atmosphere or obscured into the surrounding masonry, Roman pozzolana sets by combining chemically with water in the same way as modern Portland cement."6 This combined with another Roman construction innovation, coffering, which was used to create lightness in the cement, made the dome possible. ...read more.

A grille above the door allows a sliver of light through to the front courtyard - the only moment of the year that it sees sunlight if its main doors are closed."9 Perhaps this is a simple coincidence, but Hannah reckons not. He points to the fact that in Roman times it was common for sundials to be in the form of hollowed out domes, albeit on a far smaller scale than the Pantheon. Despite many convincing arguments, such as Hannah's, there is no definite and agreed consensus as to the function of Rome's Pantheon. As William MacDonald has written, "To say with any precision what the Pantheon meant to Hadrian and his contemporaries will never be possible."10 However, and as discussed in this essay, what all commentators agree on is the monumental impact the Pantheon has had on architecture. From its innovative dome and cement, to its entrance and beautiful granite columns, the Pantheon has had a truly revolutionary effect on architecture and construction techniques. For these innovations, and its unclear function, it is a powerful and enigmatic structure. ...read more.