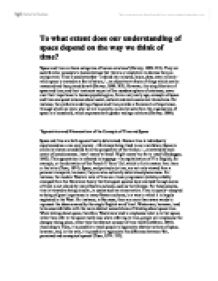 To what extent does our understanding of space depend on the way we think of time?

To what extent does our understanding of space depend on the way we think of time? 'Space and time are basic categories of human existence' (Harvey, 1989: 201). They are such familiar concepts to human beings that there is a temptation to dismiss them as unimportant. Time is used everyday - ordered into minutes, hours, days, even millenia - while space is treated as a fact of nature, '...an objective attribute of things which can be measured and thus pinned down' (Harvey, 1989: 203). However, this simplification of space and time, and their treatment as part of the mundane sphere of existence, cover over their importance to human psychology as, from a very early age, concepts of space and time can speak volumes about social, cultural and even economic interactions. For instance, the symbolic ordering of space and time provide a framework of experience, through which we learn who we are in society, as can be seen from the organisation of space in a household, which expresses both gender and age relations (Harvey, 1989). `Egocentrism and Ethnocentrism of the Concepts of Time and Space Space and time are both egocentrically-determined. Human-time is individually experienced as a one-way journey - life always being lived in our own future. Space is similarly always considered from the perspective of the thinker, '...orientated by each centre of consciousness...'near' means 'at hand'. ...read more.

Knowing that there is an object behind a wall, for instance, relies on the mind going back in time. Similarly, the person can foretell what they will see in the future, should he / she climb over the wall. In this way, present spatial awareness is always imbued with past experiences and, 'the analysis of spatial experience seems to require the usage of time categories' (Tuan, 1974: 224). Our knowledge of events, as well as objects, is similarly controlled by time. The fact that news takes time to travel means that 'far away' is often seen as analogous to 'long ago'. As Tuan (1978: 12) expresses it: 'here is now and there is then'. `Social theorists are also responsible for privileging time over space (Marx, Weber and Adam Smith, for instance). Social theory focuses on processes of social change, such as modernisation and revolution. Progress is the theoretical objective, but entails the conquest of space: the ultimate 'annihilation of space through time' (Harvey, 1989). As Lefebvre (1991: 55) states, 'today, more than ever, the class struggle is inscribed in space'; as the bourgeoisie is still the major user of space. Peet (1981) further described the 'spatial dialectics' of the economic system. He suggested that the geographic transfer of surplus value is a spatial manifestation of the social processes of exploitation. Class struggle then provides a link between these 'spatial dialectics' and the change through time to new modes of production (Peet, 1981). ...read more.

The resurgence of environmentalism since the 1970s, is a case-in-point. The environmental movement is, '...critical of the idea of mobility and of expansive space on a 'limitless' earth and calls for a return to place and locality' (Tuan, 1978: 11). `Conclusion The issues of time and space are, therefore, of great relevance, on a philosophical, as well as an mundane level. Fundamentally, time never stands still, and so our understanding of space will always be affected by the passage of time, to a certain extent. The degree to which the concept of space is dependent on time on a conscious level is, however, culturally-defined. An urban community, for instance, will probably have a far more commercial view of space than a Sioux Indian, whose appreciation of space is likely to be on a more aesthetic and philosophical level. `Overall, the changing values which we have assigned to time and space over the past century have led to destructionism. Instanteneity triumphs in the post-modern world, leaving people feeling detached from their sense of place. The future has become part of the present, as people attempt to guard against future shocks, via insurance. These combined problems have, in my opinion, led to the recent resurgence in the popularity of traditional values which has occurred in many industrialist countries, notably the USA and the UK. This represents an attempt to find stability once more in our ephemeral world. Nostalgia is effectively used to guard against time- space compression, which has already led to a reappraisal of our perceptions of time and space. ...read more.