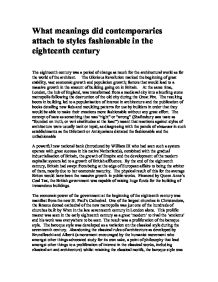 What meanings did contemporaries attach to styles fashionable in the eighteenth century The eighteenth century was a period of change as much for the architectural world as for the world of the architect. The Glorious Revolution marked the beginning of great stability, vast economic growth and population growth; factors that would lead to a massive growth in the amount of building going on in Britain. At the same time, London, the hub of England, was transformed from a medieval city into a bustling stone metropolis following the destruction of the old city during the Great Fire. The resulting boom in building led to a popularisation of interest in architecture and the publication of books detailing new fads and moulding patterns for use by builders in order that they would be able to make their creations more fashionable without any great effort. The concept of taste as something that was "right" or "wrong" (Shaftesbury saw taste as "founded on truth, or veri similitudae at the least") meant that reactions against styles of architecture were usually tacit or tepid, as disagreeing with the panels of virtuosos in such establishments as the Dilettanti or Antiquarians dictated the fashionable and the unfashionable A powerful new national bank (introduced by William III who had seen such a system operate with great success in his native Netherlands), combined with the gradual industrialisation of Britain, the growth of Empire and the development of the modern capitalist system led to a growth of British affluence. ...read more.

Old houses were retraced and refitted, and landscaped gardens were built across the country. The result of all of this building was a massive increase in the demand for architects; a demand that would lead to an increase in their status and to a new type of architect emerging. Whereas John Vanburgh, Burlington and Boyle were aristocrats who turned to architecture after a series of other jobs, the profession of architect was becoming a profession in itself. Although Burlington's Palladian creations would bring him a reputation amongst contemporaries to compete with Wren, the next generation of architects would be known as architects alone. Sir William Chambers spent nine years travelling in the Orient, a year studying in Paris and five years in Italy. Robert Adam had been a student at Edinburgh before France, Italy and Dalmatia all imposed their styles on his consciousness. The fad for travelling led to the import of many ideas, examples and styles. The improvement in the technology of copper etching led to a new ability to convey new styles, ancient styles and non European architecture in such publications as "The Gentleman's Magazine.' Styles such as the Palladian, as pioneered by Burlington were disseminated by such books as Kent's "Designs of Inigo Jones," Castell's "Villas of the Ancients," and Ware's translation of Palladio's treatise. It is notable that in Marriage a la Mode, Lord Squander's desired palace is a Palladian mansion. Hogarth wrote that it is in nature that one ought to find forms, such as the Corinthian column having its origins in ...read more.

The mode for Chinese architecture was popular enough for Lord Kames to bitterly declare it the preferred mode of building before "the Gothic" or the "Greek" schools. Attacking the Chinese style, Shebbeare's "Letters on the English Nation" criticises the proliferation of the school that encouraged "little bits of wood standing in all directions." Morris' "The Architectural Remembrancer" claims that the Chinese school "...consists in mere whim and chimera, without rules or order..." and regards the whole school as a "novelty," much like the eighteenth century Gothic school. The eighteenth century Gothic resurgence, led by Horace Walpole's Strawberry Hill villa near Twickenham. Taking the opportunity to "exhibit specimens of Gothic architecture," the resurgence of the Gothic style quickly overtook the Palladian school. Shebbeare's "Letters on the English Nation" demonstrate some hostility to the Gothic school although this likely to be more of an aesthetic hostility as opposed to anything deeper, as he reflects on the "minute unmeaning carvings which are found in the Gothic chapels of a thousand years standing" and the hundreds of houses with "porches in that taste." The "novelty" styles (Gothic/Chinese) physically contrast well with the Palladian buildings of the eighteenth century, yet all were "tasteful" and approved of. Although the novelty fads belong more to Regency England and people of the echelon of the Macaroni, the age of the great town house brought out these absurdly different styles. The Palladian school, although the height of traditional good taste, was criticised for its ignorance of life in Britain. Open atria and mosaic flooring in halls are never advisable in wet climates, and it was for such inadequacies of the school that it was condemned. ...read more.