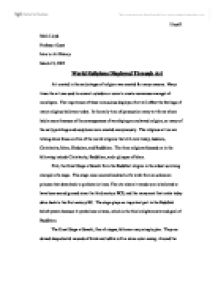 Mark Lloyd Professor Guest Intro to Art History March 21, 2005 World Religions Displayed Through Art Art created in the early stages of religion was created for many reasons. Many times the art was used to convert outsiders or even to create awareness amongst all worshipers. The importance of these miraculous displays of art still affect the feelings of many religious believers today. In the early time of persecution many art forms where held a secret because of the consequences of worshiping an outlawed religion, so many of the early paintings and sculptures were created anonymously. The religious art we are talking about focus on five of the world religions that still exist today; Judaism, Christianity, Islam, Hinduism, and Buddhism. The three religions focused on in the following include Christianity, Buddhism, and a glimpse of Islam. First, the Great Stupa at Sanchi from the Buddhist religion is the oldest surviving example of a stupa. This stupa was a sacred landmark of a tomb from an unknown princess that dates back to prehistoric times. The site where it stands now is believed to have been sacred ground since the third century BCE, and the monument that exists today dates back to the first century BC. The stupa plays an important part in the Buddhist belief system because it symbolizes nirvana, which is the final enlightenment and goal of Buddhism. ...read more.

The Good Shepard is not an original sculpture but is often repeated with multiple versions of the same statue existing. The sculpture is thought to have been derived from Greek description of Hermes the Shepard or Orpheus with the animals because of the lack of originality due in part to the intermittent persecution of early Christians. This particular statue was made out of marble. This type of sculpture is not merely for aesthetic value although it does not by any mean lack aesthetic value, this statue was a way for the early Christian artists to profess promises and mysteries. The Good Shepard image in one instance is shown from the parable in Luke above the scene of Adam and Eve representing the redemption of original sin. There is still controversy however whether or not these images are representative of Christ or God in general concerning for his herd. This image is rather intriguing do to its lack of conformity with all images of Christ, even with modern art. Christ is shown beardless and in a youthful stage. When Christ is depicted he is often shown with a beard or as a newborn child and few instances between. Like all early world religions the Good Shepard is shown in a compassionate state and gave patrons something to look at and feel strong in their faith with just like the Stupa at Sanchi and the Hagia Sophia. ...read more.

The religious purpose of the lighting is very important in creating the mood for both places of worship. The main difference between the two is to enhance the spiritual experience, the architectures of Hagia Sophia used many windows around the base of the dome to create a powerful lighting that lit up the entire church whereas the Pantheon only had one light source that created a single strong beam. This difference shows the distinction between the two religions on how they use different styles of lighting to maximize there own spiritual experience. Art is often a reflection of life. The reasons for religious art is countless in that sometimes started out as a way to recruit followers but became something that made the faithful proud and strong in their convictions. The Hagia Sophia and Stupa at Sanchi were built strong and beautifully not for the reason to show off wealth, even though it did accomplish that, but more for value of pride which is still apparent today. The Good Shepard although restricted by the unwritten laws of the artistic society in its era was made to help early Christians with their faith and teach them the compassionate way of their God. These artifacts of worship to the celestial are a way of putting a mark on history and putting the name of their religion in a legendary state. ?? ?? ?? ?? Lloyd 1 ...read more.