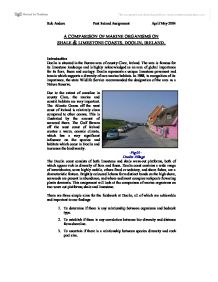 A COMPARISON OF MARINE ORGANISMS ON SHALE & LIMESTONE COASTS. DOOLIN, IRELAND. Introduction Doolin is situated in the Burren area of county Clare, Ireland. The area is famous for its limestone landscape and is highly acknowledged as an area of global importance for its flora, fauna and ecology. Doolin represents a unique limestone pavement and terrain which supports a diversity of rare marine habitats. In 1988, in recognition of its importance, the state Wildlife Service recommended the designation of the area as a Nature Reserve. Due to the extent of coastline in county Clare, the marine and coastal habitats are very important. The Atlantic Ocean off the west coast of Ireland is relatively clean compared to other oceans. This is illustrated by the amount of seaweed there. The Gulf Stream off the west coast of Ireland creates a warm, oceanic climate, which has a very significant influence on the species and habitats which occur in Doolin and increases the biodiversity. -Fig 01- Doolin Village The Doolin coast consists of both limestone and shale wave-cut platforms, both of which appear rich in diversity of flora and fauna. Doolin coast contains a wide range of invertebrates, some highly mobile, others fixed or sedatory, and shore fishes, are a characteristic feature. ...read more.

The flora/fauna was then classified into categories; hard shelled, soft, free-moving, fixed etc. Both transects was measured out and levelled using a compass clinometer. This was a very quick and basic method which combines vertical angle measurements with distance measurements. The results then need to be converted by using trigonometry. -Fig 02- Limestone Transect, Doolin. The results could then be analysed and converted using trigonometry. The rock pools characteristics were then measured, this included the distance from shoreline at high and low tide, the width, depth and length of rock-pool and the pH of water in each rock-pool. All of this data was recorded in tables using 'Microsoft Excel'. Results The data received from the compass clinometer levelling were carefully converted using trigonometry and are shown in the two profiles below (Fig 3 & 4). The values measured were generally negative values from the starting point. These were adjusted to show the slope profile easier. For example, the starting point was referred to as "0" and sea level appears at -59 meters, this was converted to represent sea level as "0" and the actual starting point as an elevation of 7 metres and a distance of 59.03 meters from the water line. -Fig 03- Limestone Transect Profile The profile below (Fig 4) ...read more.

This hypothesis was created from previous work done Nybakken (2001), who suggested the sediment in the shale rockpools created and sustained a more diverse biodiversity. This appeared to be incorrect and there was a greater biodiversity of organisms in the limestone pools. This contrast of results could have been from a number of reasons. Firstly it was quite obvious that the limestone coast was more sheltered than the shale coast, therefore the quality of habitat was higher in the limestone. There was also a large amount of bio erosion on the limestone coast which created larger, deeper and a larger quantity of rock pools. It would appear that bio-diversity of marine organisms was higher with decreasing distance from the shoreline. The shoreline appeared a controlling factor in biodiversity, however this was expected. It is quite logical to think that a higher biodiversity would be sustained closer to the sea as that is where they originate. The results also determine that species diversity generally increases with increasing pool size. As predicted previously, larger pool sizes would have more space for different more diverse species to inhabit. In a final conclusive summary, the results taken from both transects would suggest that limestone environments can maintain a more diverse biodiversity of marine organisms. However, other factors such as the distance of pool from the shoreline, the size and depth of the pool and its exposure to the wind and the sea are also influential. ...read more.