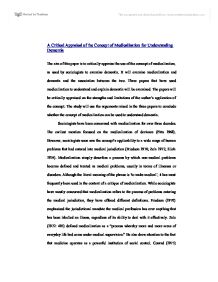 A Critical Appraisal of the Concept of Medicalization for Understanding Dementia.

A Critical Appraisal of the Concept of Medicalization for Understanding Dementia The aim of this paper is to critically appraise the use of the concept of medicalization, as used by sociologists to examine dementia. It will examine medicalization and dementia and the association between the two. Three papers that have used medicalization to understand and explain dementia will be examined. The papers will be critically appraised on the strengths and limitations of the author's application of the concept. The study will use the arguments raised in the three papers to conclude whether the concept of medicalization can be used to understand dementia. Sociologists have been concerned with medicalization for over three decades. The earliest mention focused on the medicalization of deviance (Pitts 1968). However, sociologists soon saw the concept's applicability to a wide range of human problems that had entered into medical jurisdiction (Friedson 1970; Zola 1972; Illich 1976). Medicalization simply describes a process by which non-medical problems become defined and treated as medical problems, usually in terms of illnesses or disorders. Although the literal meaning of the phrase is 'to make medical', it has most frequently been used in the context of a critique of medicalization. While sociologists have mostly concurred that medicalization refers to the process of problems entering the medical jurisdiction, they have offered different definitions. Friedson (1970) emphasised the jurisdictional mandate the medical profession has over anything that has been labelled an illness, regardless of its ability to deal with it effectively. Zola (1972: 495) defined medicalization as a "process whereby more and more areas of everyday life had come under medical supervision." He also drew attention to the fact that medicine operates as a powerful institution of social control. Conrad (1975) stated that medicalization consists of defining behaviour as a medical problem and mandating the medical profession to provide some treatment for it. Illich (1976) termed medicalization 'social iatrogenesis' and said that it resulted from medical imperialism; he expressed particular concern at the increasing 'medicalization of life.' ...read more.

The second paper is by John Bond (1992) and is simply entitled 'The medicalization of dementia.' The stated aim of the paper is to describe the contribution of medicine to the social construction of dementia and to look at the impact of the medicalization of dementia on people with the condition and their informal caregivers. He states that dementia is a disease category that has been used by psychiatrists to describe a variety of clinical conditions that appear to result in a loss of intellectual power. He adds that dementia is not a single entity but is applied by the medical profession to a number of conditions including Alzheimer's disease, Multi-Infarct dementia, Creutzfeld-Jacob disease, Pick's disease, Neurosyphilis, Korakoff's psychosis, Huntington's disease and Parkinson's disease. Bond applies the concept of medicalization to explain why the biomedical model in the study of dementia is so dominant. He provides a definition of medicalization: it means defining behaviour as a medical problem and mandating the medical profession to provide some form of treatment for it. He references Friedson, Zola, Conrad and Illich, all contributors to the medicalization debate. His definition of medicalization is almost identical to Conrad's definition in the latter's seminal paper on the discovery of hyperkinesis (1975). This is not a coincidence as Bond applies the concept of medicalization by linking dementia to deviance, a topic well covered by Conrad. Bond states that the loss of intellectual power in dementia is perceived by professionals and lay people as being problematic because it leads to difficulties in remembering, making decisions, thinking through complex ideas, carrying out practical tasks, retaining information and acquiring new skills. He adds that behaviour which has been defined as a problem is deviant behaviour. This allows him to link dementia with deviance. Bond's central argument is that social processes are excluded from the biomedical model, which is therefore incomplete as an explanation of dementia. ...read more.

It can be seen from these papers that medicalization is a useful concept for understanding dementia. Through studying medicalization, we come to understand the social processes involved in the cultural production of medical categories such as dementia and the extension of medical control over the disease. It helps us also to understand the ever-increasing demands for more healthcare provision (Armstrong 2000). However, the concept of medicalization has limitations in its examination of dementia. It focuses its critique on the weakness of the biomedical model, which is very strong in some types of dementia, for example Neurosyphilis. The medicalization thesis also perhaps focuses too much on the medical profession - one of the greatest recent drives to medicalization of dementia has been the pharmaceutical industry which has developed new drugs to treat it. In addition, the medicalization thesis is guilty of neglecting some of the changes that have been occurring in the relationship between medicine and the lay public in recent times. Williams and Calnan (1996) state that most medicalization studies view the general public as largely passive or uncritical of medicine's expansion and this is largely true of the papers above. They point out that lay perspectives on medicine have become much more critical in recent years. Lupton (1997) notes that our post-modern society is characterised by people's increasing disillusionment with scientific medicine. The media has, in particular, played a de-mystifying role in relation to modern medicine. There is also a paradox within the medicalization thesis. While it suggests that the wider social context of illness such as dementia must be taken into account by health professionals, if they do take them into account they are then accused of medicalizing more aspects of social life (Doyal & Pennel, 1979). Thus, a more humane medicine may, at the same time, be one that involves more extensive social regulation. Lastly, Strong (1979) has suggested that sociologists, in drawing attention to the expansionist tendencies of modern medicine and hyping alternative social models of health and illness, may be just as guilty as their medical counterparts of empire building. ...read more.