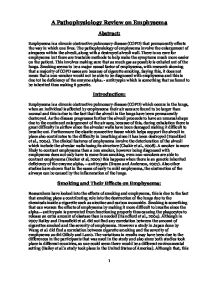 A pathophysiology review on emphysema

A Pathophysiology Review on Emphysema Abstract: Emphysema is a chronic obstructive pulmonary disease (COPD) that permanently effects the way in which one lives. The pathophysiology of emphysema involve the enlargement of airspaces within the alveoli, along with a destroyed alveoli wall. There is no cure for emphysema but there are treatable methods to help make the symptoms much more easier on the patient. This involves making sure that as much gas as possible is exhaled out of the lungs. Smoking seems to be a major causal factor of emphysema, with research showing that a majority of COPD cases are because of cigarette smoking. Saying this, it does not mean that a non-smoker would not be able to be diagnosed with emphysema and this is due tot he deficiency of the enzyme alpha1 - antitryspin which is something that us found to be inherited thus making it genetic. Introduction: Emphysema is a chronic obstructive pulmonary disease (COPD) which occurs in the lungs, when an individual is affected by emphysema their air sacs are found to be larger than normal and this is due to the fact that the alveoli in the lungs have been permanently destroyed. ...read more.

The role of ATT is to antagonize serine selium, macrophages release the enzyme serine selium in the lungs when the lungs has become slightly infected or when an individual breathes in harmful irritants (Handford et al., 2004). It has been reported that patients diagnosed with emphysema seem to have a deficiency of the enzyme ATT. (Therapists Without Borders, 2011). The harmful irritants could be said into relation to those found in cigarettes where Braun and Anderson stated that the majority of cases of emphysema is caused by chronic smoking, although those who do not smoke can still end up developing emphysema through a deficiency of ATT. This is something that can be inherited from one to another thus making it genetic. There are other ways in which emphysema can develop, and that is through disorders of the connective tissue or through taking harmful drugs such as cocaine due to the insoluble filters found inside it (Braun and Anderson, 2007). The permanent increased airspaces which are situated furthest away from the bronchioles are what define the pathological diagnosis of emphysema. Because of this the alveolar surface area is dramatically decreased making it difficult for gas exchange, this makes the process of expiration much harder work for the lungs since the walls of the alveoli ...read more.

In addition to this the treatments available also help reduce the effects of hyperinflation, thus helping the exhalation process to become much easier (Ingenito et al., 2005). The inflammation 0f the lungs can be treated if diagnosed early where the airways become less obstructed making breathing easier (Braun and Anderson, 2007). Before being diagnosed, tests run on the smoking history, family history and any clinical symptoms present in their lungs that could manifest and exhalation is also tested for each individual. Considering those who don't smoke, the enzyme levels of AAT are measured to see if there is a normal volume of it present or if it is lower than expected (Braun and Anderson, 2007). It is most important to remember that emphysema is irreversible, so treatments must find a way to tone down the symptoms to help with breathing. Cigarette smoking must be ceased at all costs so the symptoms of emphysema does not worsen, also there are certain drugs that can be given to increase the number of AAT. Oxygen supplements would also have to be given and in more severe cases surgery can be used where a lung transplant would take place (Braun and Anderson, 2007). ...read more.