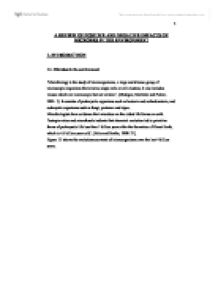 A REVIEW OF POSITIVE AND NEGATIVE IMPACTS OF MICROBES IN THE ENVIRONMENT 1. INTRODUCTION 1.1. Microbes in the environment 'Microbiology is the study of microorganisms, a large and diverse group of microscopic organisms that exist as single cells or cell clusters; it also includes viruses which are microscopic but not cellular', (Madigan, Martinko and Parker, 2003: 1). It consists of prokaryotic organisms such as bacteria and archaebacteria; and eukaryotic organisms such as fungi, protozoa and algae. Microbiologists have evidence that microbes are the oldest life forms on earth. 'Isotopic ratios and microfossils indicate that chemical evolution led to primitive forms of prokaryotic life less than 1 billion years after the formation of Planet Earth, which is 4.5 billion years old', (Atlas and Bartha, 1998: 27). Figure 1.1 shows the evolutionary events of microorganisms over the last 4 billion years. Figure 1.1: Evolutionary events of Microorganisms (Source: Atlas and Bartha, 1997: 28) The human race, and many other higher life forms, owes its existence to microbial activity 10,000 years ago when cyanobacteria fixed oxygen in the atmosphere. Figure 1.1 highlights how biodiversity has gradually increased since anaerobic bacteria evolved. Scientific evidence shows that the sun's temperature has increased by 30% during the past 4-5 billion years. By microbial activity changing original carbon dioxide to the present oxygen atmosphere, temperature remains around 13�C, whereas a lifeless earth would be around 250�C. 1.2. Microbes and Biotechnology 'The majority of microorganisms make crucial contributions to the welfare of the world's inhabitants by helping to maintain the balance of living organisms and chemicals in the environment', (Tortora, Funke and Case, 2004: 1). ...read more.

MRSA has also shown resistance to most disinfectants, with alcohol being the only proven sanitiser. A study by Neely and Maley (1999) also highlighted that 'staphylococci and enterococci can survive for days to months after drying on commonly used hospital fabrics and plastics'. Staphylococcus aureus also affects the food industry. Capable of withstanding high salinity environments, S. aureus thrives on heavily salted foods that would normally be preserved by the high salinity levels. Another microbe affecting the food industry is the thermophilic fungus Talaromyces macrosporus. Heating food is recommended in order to kill harmful dormant cells (ascospores); however Dijksterhuis and Teunissen (2003) stated that 'extreme heat and high pressure can activate these cells to germinate'. They are a common contaminant of fruit juices, and can withstand processes such as pasteurisation. 2.2. Positive effects Microbes can also be beneficial in human society and have positive effects on a number of practises. Lactobacillus acidophilus is rod-shaped, non-pathogenic bacteria found in dairy products. They are classed as acidophiles as they are resistant to pH values as low as 4. 'The acid resistance of Lactobacilli enable them to continue growing during natural lactic fermentations when the pH value has dropped too low for other lactic acid bacteria to grow, and the Lactobacilli are therefore responsible for the final stages of most lactic acid fermentations', (Madigan, et al, 2003: 404). These bacteria are very important to the food industry, and are also present in vinegar, cheese and yogurt. When consumed, L. acidophilus is beneficial to the body as part of the natural flora in the digestive tract and the genitourinary tract. ...read more.

They are the oldest life forms on the planet, and without them human society would not exist. Microbes assist human activities in many ways; both naturally and through deliberate manipulation. Section 1 highlights how microbes assist the balance of the environment via the recycling of nutrients, and how all plants/ animals/ humans rely on microbial existence for forming food chains and energy sources. It also highlights the great diversity of microbial uses, and how human manipulation has allowed them to aid many industries such as food production, pharmaceutical production, agriculture, etc. However; both section 1.2 and section 2.1 identify how many microbes are undesirable in human society by causing disease, food spoilage, industrial damage, etc. Whilst section 2.2 highlights how humans have used microbes to counteract disease, it is disease that controls populations and is a natural way of preventing the planet from becoming over-crowded. Whilst human activities will continue to interfere with diseases, the evolutionary arms race will ensure that resistant mutations will evolve. Section 3 highlights how the state of the environment may depend on processes such as bioremediation in order to reduce pollution. Although this is of great importance, Lowrie and Wells (1994) stated that 'it is unlikely that bacteria could ever cope fully with a major oil pollution disaster, such as the deliberate release of crude oil...' This is because microbes cannot access through the whole oil slick, and temperature can affect their effectiveness. Low temperature in parts of the world, such as in Alaska where the Exxon Valdez oil tanker disaster occurred, may affect the productivity of certain strains. Efforts still need to be put in place in terms of preventative measures rather than solutions when it comes to environmental pollution. 5. REFERENCES AND BIBLIOGRAPHY 5. ...read more.