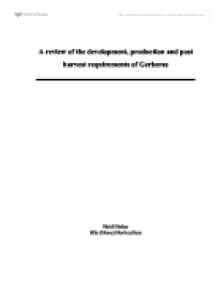 A review of the development, production and post harvest requirements of Gerberas

A review of the development, production and post harvest requirements of Gerberas Heidi Baker BSc (Hons) Horticulture Contents 1.0 Introduction: 3 2.0 Market: 3 3.0 Production: 4 3.1 Propagation: 5 3.2 Cultivation in soil: 5 3.3 Cultivation in substrates: 6 3.4 Light Requirements: 8 3.5 Harvesting: 8 4.0 Pests and Diseases: 9 5.0 Post Harvest Requirements: 10 6.0 Development: 13 7.0 Conclusion: 14 8.0 References: 15 1.0 Introduction: Gerberas (also known as the Transvaal or Barberton Daisy) were discovered in the early 1880's and have been popular with plant breeders ever since (Kessler, 1999). They are grown world wide and available all year round as cut flowers, pot plants and bedding plants, making them extremely versatile for many different markets. As cut flowers they are extremely popular as they are high value and available in over 200 different varieties (Flowers and Plants Association, 2007). They also have a long vase life, and cope well with transportation, which makes them suitable for domestic and export markets (Nair, 2003). Many improvements have been made over the years and most of the modern breeding work has come from the Netherlands where Gerberas were the fifth most popular flower to come out of the Dutch auctions in 2003 (Flower Council of Holland, 2003). 2.0 Market: Gerberas are very popular for use in bouquets in supermarkets and florists, but obviously in varying quantities. A packager for a supermarket will require a large number of the same colour Gerbera, with the same stem length and flower size, to put in the mixed bouquets, which are then distributed throughout supermarkets, petrol stations and other similar outlets. The flowers for these outlets usually come with a guaranteed vase life so it is essential that the flowers are in the best possible condition. Florists operate on a much smaller scale, so possibly the best solution for them is the mixed boxes of Gerberas, where a range of colours are packaged together. ...read more.

Rockwool: Dutch Gerbera growers have been experimenting with rock wool and have found that a combination of small cubes with a solid disc positioned on the top of the container produces positive results. This technique was developed in 2004, with an introduction to the commercial market in 2005. Benefits have included good rooting speed and distribution and excellent water drainage (FlowerTech, 2006). 3.4 Light Requirements: Gerbera is as a quantitative short day plant and field trials by different growers have shown that most plants produce fewer flowers as soon as the day length is more than 11.5 hours (Wessels, 2006). Getting the right intensity of light is essential, as Gerberas require a high light intensity to produce a high number of good quality buds. If the light is too low, the plant will have stretched foliage and long weak flower stems, whereas if it is too high, the plant will be compact with the stems hidden in the foliage (Kessler, 1999). Shading can be used to reduce light levels and protect the plants from excessively high summer temperatures. European countries producing Gerberas have shorter days, lower winter light and cooler temperatures than countries in America and Africa and so more energy for light and heat is used. It is possible to increase the production of some Gerbera varieties at times of the year when they are more expensive by lighting for longer day lengths, but the downside to this would be a noticeable dip in production when the day lengths are returned to normal (Wessels, 2006). Research is still being carried out to reduce this dip in production by using different intensities in light and trials with different cultivars 3.5 Harvesting: The harvesting of most Gerbera flowers should occur when the second circle of disk florets shows pollen development (Rogers and Tjia, 1990), but there are some varieties, such as those which close at night, that can be harvested a bit later (Reid, 2004). ...read more.

Machines have also been developed for larger scale businesses to attach the cup and therefore saving on labour costs (Flowertech, 2003). The plastic cups are perforated so that the flower stays ventilated, reducing the risk of Botrytis. Figure 7: Gerbera Cups Source: Roskam (2007) 6.0 Development: Due to the popularity of the Gerbera, new developments are appearing all the time to try to ensure the best possible crop is produced. This report has already mentioned examples with the production techniques, post harvest treatments and the packaging, but the main developments are with the different varieties. New varieties of Gerbera are being bred all the time and breeders not only try to come up with new colours and petal formations, but also to improve vase life, stem strength, and productivity. Gerbera specialists Terra Nigra have recently come up with a variety of Gerbera that has foliage on the stem of the flower, called Gerfolia(r) (figure 8). Figure 8: Gerfolia(r) Source: Terra Nigra (2007b) This will increase the value of the flower as it will reduce the need for extra foliage in bouquets and arrangements and will cut down on the bacterial pollution of the vase water, therefore extending the vase life. This variety is still on trial and is due to be introduced to the cut flower market some time in 2008 (Terra Nigra, 2007b). As well as developing new varieties with interesting features like the Gerfolia(r), breeders are also cultivating varieties with resistant to particular diseases such as powdery mildew (Institute of Food and Agricultural Sciences, 2007). 7.0 Conclusion: Breeders are constantly striving to produce Gerberas with a fast cropping period, long vase life, sturdy stem, high yields, interesting petal formation and colour that are easy to transport and meet the demands of the market. As with all areas of the floristry industry, the fashions change and what might meet the demands of the market at present will not necessarily meet the same criteria in the future. Growers and breeders will remain competitive in this market to always try and produce the most fashionable and high value flowers. 8. ...read more.