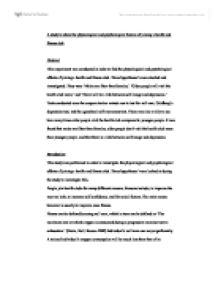 After the twelve minutes was up, the distance ran was measured. This could then be put into an equation and used to calculate the participant's vo2 max. The equation used to work this out was (distance covered - 504.9 / 44.73.) The cooper's twelve minute run is a reliable test as long as the participant's run to their maximum, the track is of correct distance, and the stopwatch is reliable. All of this was ensured before the test. Another measurement that had to be taken for this study was the amount of times the participant's visited the health club. This was recorded in the form of a tally chart, where each participant had a mark next to their name each time they visited the health club. The sixty participants' were set up into young and old categories in order to see if one of the hypothesis's was correct. Out of the sixty participant's, 32 were in the old category, and 28 were in the young category. The next factor measured was each participant's depression level. This was done using Goldberg's depression test. In this test there are eighteen statements where the participant had to answer with one of five options which were, not at all, only slightly, partly, quite a lot, a lot, and to a great extent. An example of one of the statements is 'I feel like a failure.' Once all the statements had been answered with a response, a score out of ten was given to each participant. Self-image was the final factor to be measured. This was done by using the Egoschool self awareness test. This involved twelve pairs of statements being from one extreme to another, with a scale of eight in between. An example of one of the pairs of statements was I am not self confident at one end of the scale, and I am self confident at the other end. ...read more.

The results obtained in this section were certainly strange. This is because when Pearson's correlation was looked at, a near perfect positive correlation was found. This was strange as it suggested that the higher ones self-image is, the higher their depression level will be. This backs up the hypothesis by showing that there is a link between the two, but it is certainly not the result that was expected. This could be to do with bad calculations in the results, or incorrect method of testing. This needs to be studied again to ensure these results were correct, as they certainly were weird results. Conclusion The study as a whole went well, with some interesting findings. After the results section, it was found that males were fitter than females. It was also found that there is a link between self-image and depression. The final finding was that the results suggested that older people didn't necessarily visit the health club more. If the study was to be repeated again, there are some ways in which it could be improved. One way it could have been improved would have been to do different or more self-image and depression tests. It is believed that the results found didn't appear to make sense, so more tests should be done to see if the results were actually correct. Another way to improve the study would have been to have more people in the study. Although sixty was a high enough number of participants, even more participants would have made the results found in the study even more conclusive. A final way that would have made the study more conclusive would have been by having more than one fitness test. There is many more fitness test which finds an individual's vo2 max. These include the multistage fitness test and the Harvard step test. If one more test had been done, it would have confirmed that the vo2 max figure found was correct. Overall, however, the study can be classes as a success with some interesting findings. ...read more.