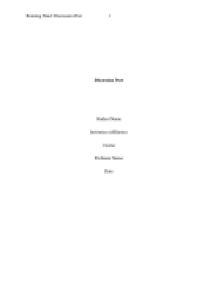 A study was conducted to examine the motivation and impact of group-based emotions in modern society. The researchers conducted four different studies on members of the Israeli nation

ï»¿Running Head: Discussion Post Student Name Institution Affiliation Course Professor Name Date General Psychology A study was conducted to examine the motivation and impact of group-based emotions in modern society. The researchers conducted four different studies on members of the Israeli nation where. Many Israelis feel melancholy on Memorial Day despite whether or not the individual has experienced direct remorse ensuing from warfare or terrorist attacks (Porat et al., 2016). In the first study, the researchers investigated whether or not those individuals who had a greater need to experience a sense of togetherness were a little more likely to have a sense of group-based sorrow on Memorial Day. It was explained to the participants that the survey was looking at attitudes and feelings around Memorial Day. (Porat et al., 2016) These participants were provided with a questionnaire where they were asked to express their opinion on whether their motivation to feel remorse on Memorial Day was instrumental in making them feel like part of the larger Israeli society. ...read more.

One is more likely to give a general opinion based on information they have collected prior about a subject or situation, which could be valid according to previous experiences but not necessarily accurate at the moment. A bigger group size, consensus, strong collective efficacy, and the perception of the collective having a superior status are all associated with enhanced conformity. A person's prior awareness of popular sentiments can cause them to conform to the norms of society even when they are not directly linked with the group. In the case of the COVID-19 pandemic, a group that generally opposes the ruling government may find cause to dispute the regulations put in place to control the spread of the virus. This group may try to find fault in the ruling side and question the authenticity of the threat posed by the pandemic. Other individuals who identify with the opposition side are more likely to be inclined to this notion so that they may fulfill their need to belong to their chosen group. ...read more.

The research findings in the article are helpful in further study of motivated emotion regulation. This research proves that an individual need to belong in a group plays a role in shaping their emotional response to events and situations. (Porat et al., 2016) These findings are instrumental in the study of group-based emotions. Prior research in group thinking shows that similar emotions can be felt by a group of people which thus strengthens their bond. However, this research shows that these group emotions may be, in turn, motivated by the individual necessity to fit in the group. This sheds light on the processes that are involved in the rather complex study of group-based emotions. Different people responded to the regulatory orders differently according to various factors, including their insecurities and biases and the more significant influence of the particular social groups they associate with. While others feared for their wellbeing, others took it as an opportunity to bond with their social-political grouping and create conflict with the ruling groups. However different the reactions were, each individual responded in a way that they assumed was ideal to fit their situations. Reference Porat, R., Halperin, E., Mannheim, I., & Tamir, M. (2016). ...read more.