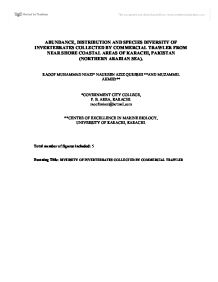 ABUNDANCE, DISTRIBUTION AND SPECIES DIVERSITY OF INVERTEBRATES COLLECTED BY COMMERCIAL TRAWLER FROM NEAR SHORE COASTAL AREAS OF KARACHI, PAKISTAN (NORTHERN ARABIAN SEA). RAOOF MUHAMMAD NIAZI* NAUREEN AZIZ QURESHI **AND MUZAMMIL AHMED** *GOVERNMENT CITY COLLEGE, F. B. AREA, KARACHI. raoofmniazi@hotmail.com **CENTRE OF EXCELLENCE IN MARINE BIOLOGY, UNIVERSITY OF KARACHI, KARACHI. Total number of figures included: 5 Running Title: DIVERSITY OF INVERTEBRATES COLLECTED BY COMMERCIAL TRAWLER ABSTRACT The distribution and abundance of benthic macro fauna in near shore waters off Karachi is studied for over a period of one year. For this purpose the marine benthic fauna was collected every month from otter trawl catches of "Hella" fishing trips undertaken by Karachi based commercial shrimp trawlers fishing in depths of about 12 meters. A total of 76 species of invertebrates belonging to 38 families were studied. The distribution and abundance varied with seasons and maximum number of invertebrate species was found during the monsoon season when salinity was low and temperature was high. With increasing salinity and falling temperature the number of invertebrate species in the study area, seemed to decrease. The diversity of invertebrate species collected was studied using the diversity indices and the seasonal variation in the diversity indices was also discussed. ...read more.

The trawling operations were generally a daylong and are locally known by the name of "Hella" fishery. Random sample from the total catch of the trawl was separated on every trip for subsequent study in laboratory. Identifications of invertebrates were made to species or generic level with the help of available literature. During the monthly observations temperature was measured by the thermometer and salinity by refractometer in the laboratory. RESULT AND DISCUSSION On the fishing grounds off Karachi invertebrate fauna was found abundant. A total of 76 species of invertebrates belonging to 38 families were collected. In (Table 1) the month-wise occurrence of three most abundant invertebrate species in the study area were shown among these Oratosquilla nepa, Charybdis callianassaand and Bulla ampulla were found to be more numerous then other species in the area, while (Table 2) Shows the dominant number of individuals of invertebrate species in near shore waters off Karachi. Monthly distribution of invertebrate species shown in (Fig.1) The Shannon and Wiener diversity index was use for the evaluation of species diversity in each collection of the months (Table 3). Diversity index is a mathematical measure of species diversity in a community. ...read more.