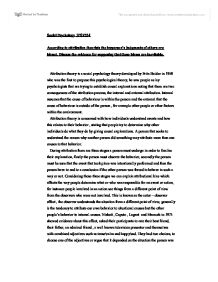 According to attribution theorists the laypersons judgments of others are biased

Social Psychology 1PSY514 According to attribution theorists the layperson's judgments of others are biased. Discuss the evidence for supposing that these biases are inevitable. Attribution theory is a social psychology theory developed by Fritz Heider in 1958 who was the first to propose this psychological theory, he saw people as lay psychologists that are trying to establish causal explanations noting that there are two consequences of the attribution process, the internal and external attribution. Internal assumes that the cause of behaviour is within the person and the external that the cause of behaviour is outside of the person , for example other people or other factors within the environment. Attribution theory is concerned with how individuals understand events and how this relates to their behavior , stating that people try to determine why other individuals do what they do by giving causal explanations. A person that seeks to understand the reason why another person did something may attribute more than one causes to that behavior. During attribution there are three stages a person must undergo in order to finalize their explanation, firstly the person must observe the behavior, secondly the person must be sure that the event that took place was intentionally performed and then the person have to end to a conclusion if the other person was forced to behave in such a way or not. ...read more.

not normal and unusual to a particular situation, also refers to "consistency" which is the situation where an individual behaves the same way when in similar conditions and lastly makes a point about "distinctiveness" where an individual's behavior is very strange according to the situation. For instance, James may observe his sister losing her temper in response to her husband criticizing her in front of the children, James' personal judging criteria may be that his sister's behavior is high on consensus because is usual for people in general to lose their temper in that kind of situations. James will also support that the behavior is high in consistency because is typical for his sister to act like this as she has done it before in similar cases and low in distinctiveness as she has done it in many other situations as well. In order to distinguish between internal and external causes Harold H. Kelley noted that internal cause can take place when consensus is low, consistency is high and distinctiveness is low, on the other hand an external cause can be when consensus is high, consistency is low and distinctiveness is high. McArthur in 1972 tried to test Kelley's attribution theory by presenting participants on the eight possible patterns that may come out as a result of Kelly's theory. The participants had to attribute causality for the described events , for instance "Lucy falls asleep during professor White's lectures" in order to ...read more.

A contribution was made by Daryl Bem in 1962 in the area of self attributions derived from Skinner's operant conditioning. Self-perception theory states that individuals are not aware and sure for their feelings and beliefs so they can achieve that by looking at their own behaviors in different circumstances and that the actor is in the same position as the observer that tries to give a causal explanation about the event and the inner state of the actor. Bem noted that by self-perception people learn to understand their inner feelings of anger, happiness, anxiety or hunger, furthermore, people cannot learn their own attitudes and beliefs until they act. Another assumption that has to do with attribution biases is scapegoat theory where people have the tendency to blame others when things go wrong thus they look for scapegoats to displace their aggression, this might happen to groups or individuals. Given that nobody knows everything, false attributions are easily made by everyone.People use causal explanations to different situations in order to reduce ambiguity and impose a sense of understanding as it offers them predictability and controls their behaviour by simplifying the current event. Attribution theory explains the course of people's thoughts and the way to their conclusions. It explains how individuals view their on place in hierarchy at the moment and in the future. People are na�ve psychologists seeking to understand their own and others' behaviour where they are actually poor scientists biased in many ways. ...read more.