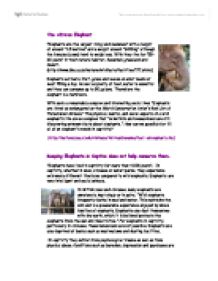 The African Elephant "Elephants are the largest living land mammals" with a height of around "3.5 metres" and a weight around "6000kg" although the females (cows) tend to weigh less. With they live for "55-60 years" in their natural habitat, Savannah grassland and desert. (http://www.bbc.co.uk/nature/wildfacts/factfiles/177.shtml) Elephants eat bark, fruit, grass and leaves an adult needs at least 150kg a day. As well as plenty of food, water is essential and they can consume up to 50 gallons. Therefore the elephant is a herbivore. With such a remarkably complex and interesting social lives "Elephants are listed as endangered on the World Conservation Union's Red List of Threatened Animals." The physical, mental, and social aspects of a wild elephant's life are so complex that "scientists and researchers are still discovering unknown facts about elephants." How can we possibly for fill all of an elephant's needs in captivity? (http://nationalzoo.si.edu/Animals/AfricanSavanna/fact-afelephant.cfm) Keeping Elephants in Captive does not help conserve them. ...read more.

"Elephants travel over large distances in the wild, but are confined to tiny enclosures in captivity for about 9 months of every year and only slightly larger ones for the rest." (http://www.greatdreams.com/eeyore/elecruel.htm) The stress and frustration of circus life takes its toll on the animals' mental state. "Circus animals can often be seen performing repetitive, obsessive actions, such as pacing back and forth, rocking, chewing their tails or paws or licking themselves. Elephants cry salt water tears, just like people do, when they are under severe stress." In one incident, an elephant was so distressed that she apparently took her own life: "An elephant we had captured actually committed suicide. One evening, at a village called No Lu, we had tied up our captives as usual and retired to a neighbouring house for a meal, when one of the Emperor's men came in to inform him that a female elephant was dead. ...read more.

the changes occurring now are possibly the most exciting yet. Zoos are helping to protect threatened species and are playing an increasingly significant role in international conservation. The visitors and supporters of zoos directly fund the conservation work that they are involved in. (http://www.chesterzoo.co.uk/conservation.asp?Page=143) Conclution If treated corredtly and kept in similar conditions as what a wild elephant would live in. By raising awarness and support, I believe that keeping elephants in zoos and sarfari parks plays an important part in conserving them. On the other hand I think forcing elephants to perform tricks is apauling and therefore do not agree with keeping them in circuses for our benefit only. Bibliography During this project the main source I have used is the internet. The sites include * http://nationalzoo.si.edu/Animals/AfricanSavanna/fact-afelephant.cfm * http://www.chesterzoo.co.uk/conservation.asp?Page=143 * http://www.chesterzoo.co.uk/conservation.asp * Baze, W. (1955) Just Elephants, translated from the French by H.M. Burton. Elek books, London. * http://www.greatdreams.com/eeyore/elecruel.htm * http://nationalzoo.si.edu/Animals/AfricanSavanna/fact-afelephant.cfm * http://www.fightback4elephants.com/ * http://news.bbc.co.uk/cbbcnews/hi/chat/your_comments/newsid_2352000/2352807. ...read more.