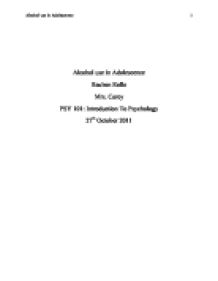 Alcohol use in adolescence. By learning and studying what leads young people to drink alcohol, and how this will affect their lives, we can then determine what action need to be taken to help remove ourselves from our ever-increasing attraction to alcoho

Alcohol use in Adolescence Reuben Rolle Mrs. Carey PSY 101: Introduction To Psychology 27th October 2011 Table of Content Page Introduction 3 Why Young people Use Alcohol? 3 Can Alcoholism be genetic? 4 Review of Literature 5 Theory and Hypothesis 6 Methodology 7 Measures 7 Results 8 Conclusions 9 Discussions 10 References 11 Introduction Alcohol abuse is a growing problem in our society. Daily people are injured and killed in alcohol-related accidents and this has an effect on each and every person as a result of these occurrences. Whether we are personally involved or have directly suffered from the activities of someone who is under the influence of alcohol, we all suffer from the negative consequences of alcohol. Many young persons in high school and college engage in such activity as this. Since we have those persons who choose to abuse these privileges we need to develop consequences for them. By learning and studying what leads young people to drink alcohol, and how this will affect their lives, we can then determine what action need to be taken to help remove ourselves from our ever-increasing attraction to alcohol. Why young people use alcohol? During a research Michael and Rebecca C. Windle discovered several reasons that provide incentives for adolescents to consume alcohol. Using a written survey, it was determined that high school students begin to use alcohol to cope with problems in their lives, including task-oriented, emotion-oriented, and avoidance coping. ...read more.

Theory and Hypothesis The action perspective assumes that human development is initiated and directed by the intentions and goals of developing individuals. That is, humans shape their own development through goal-directed action (Silbereisen and Eyferth, 1986). Thus drinking can be viewed as rational, goal-directed action. 'The present study viewed students alcohol use as a purposive behavior directed toward the attainment of instrumental, developmentally relevant goals. The extent to which psychosocial adjustment, personal goals, and beliefs about alcohol predicted alcohol use and binge drinking was examined. The hypotheses were as follows: (1) students with more positive self-images will drink less and students who feel more accepted by their peers will drink more; (2) students with high social goals will drink more, and students with high academic goals and high health goals will drink less; and (3) beliefs about the fun and risk of alcohol will predict drinking. Finally, it was hypothesized that (4) goals and beliefs that promote or encourage drinking (social goals, the belief that drinking is fun) will be more strongly related to drinking than goals and beliefs that hinder or discourage drinking (academic goals, health goals, the belief that drinking is risky)' (Maggs, 1995). Methodology Participants and Procedure: The participants were 344 students living in on-campus residence at a medium-sized Canadian university. The average age was 18.7 years old (74% were younger than the legal drinking age of 19 years). ...read more.

There the drinking age is younger and the consumption of alcohol by adolescents or young adults is more widely accepted compared to America and here in the Bahamas. I would have liked this study to have taken more into consideration the psychological effects the media had on adolescent alcohol use and binge drinking. The advertising of alcohol is everywhere now, magazines, television, the movies, radio its everywhere all the time. This affects the psyche of adolescents and young adults, with alcohol companies and advertisements making alcohol seem to be a safe and fun alternative to being sober. Commercials are filled of young adults laughing, smiling, and having nothing but fun on television, hence adolescents relate this with the consumption of alcohol. Alcohol today is a problem in our country and the media is doing nothing but making it worse, and diminishing the youth and innocence of adolescents. Therefore, when young people begin drinking especially at an early age, this is sometimes a predictor of problem with alcohol later in life. Interviews of adults consistently confirm a strong association between an early initiation of drinking and later alcohol-related problems. People who binge drink also are at higher risk for later alcohol problems. Young adults who drink heavily are at particular risk for behavioral problems and may have trouble adjusting to adult roles, but most people tend to reduce their drinking by their mid-twenties as they start to acquire adult roles, such as becoming a spouse, parent and worker. ...read more.