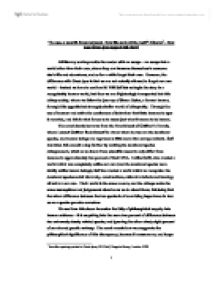 &quot;An ape, a most ill-favoured beast. How like us in all the rest?&quot; (Cicero)[1]. How does Great Apes support this view?

"An ape, a most ill-favoured beast. How like us in all the rest?" (Cicero)1. How does Great Apes support this view? All literary works provide the reader with an escape - an escape into a world other than their own, where they can immerse themselves in someone else's life and adventures, and so for a while forget their own. However, the difference with Great Apes is that we are not actually allowed to forget our own world - instead we have to confront it. Will Self lets us begin the story in a recognisably human world, but then we are frighteningly transported into this chimp society, where we follow the journey of Simon Dykes, a former human, through this opposite but strangely similar world of chimpunity. Through the use of humour and satire the continuum of behaviour that links humans to apes is revealed, and this is what forces us to assess just what it means to be human. The novel clearly borrows from the Fourth book of Gulliver's Travels, where Lemuel Gulliver finds himself in a land where horses are the dominant species, and human beings are regarded as little more than savage animals. Self has taken this conceit a step further by making the dominant species chimpanzee's, which as we know from scientific research only differ from humans in approximately two percent of their DNA. Unlike Swift, who created a world which was completely unlike our own (and the dominant species were totally unlike human beings), Self has created a world which we recognise: the dominant species social hierarchy, constructions, cultural artefacts and ideology all mirror our own. ...read more.

Their constant grooming - picking various items from each other's fur - is vile enough, but their s****l antics really mark the gulf between them and us. The way it goes on is almost too ridiculous to comprehend, but we have to imagine it to receive the full effect of our difference with them. The appearance of the chimps is perhaps the funniest aspect - as Simon himself comments, it is like living in a PG Tips commercial, as the chimps wear clothes, and the females wear "swelling protectors" (p.290) to hide their very different s****l organs. A good example of humour, revulsion and fear epitomised in Great Apes is on p.289, where Simon laughs hysterically at a middle aged female in a "plain grey jacket and plainer white blouse" mating a succession of chimps on a staircase, her swelling protector "a heap of pleats, some steps below where its owner bucked and yawped." We can see the hilarity of the scene as Simon does, which is followed by probably the most b*****l scene in the novel - Busner and Simon are chased by the chimps the latter was ridiculing. Self keeps the humour going with comments like "the Ready Brek breath of the big chimp", but still we are reminded here of the ferocity of this species, and also of our own - we know gangs of people can, and often do, attack others in our society. ...read more.

Obviously, this is an almost impossible scenario, but the faint plausibility of it is perhaps what causes us to cling on to that two per cent difference between us and our simian friends. We know apes can and have been taught basic language skills, so know they have the potential, but who wants to admit they are gaining on us? By treading them down and hanging on to that two per cent difference, we can hopefully prevent their development as a communicating breed and also forget about that ninety-eight percent of genetic makeup that is exactly the same as ours. Self has satirised many of the worst aspects of humanity through his representation of a parallel world of chimpanzees. He has shown we would need to change little of either species to make both indistinguishable from one another. Great Apes works as an interesting, unique and thought provoking probe into human nature which urges us to see these "ill-favoured beasts" we share our world with in a new light. At the same time we are provided with a disconcerting style of humour, which, coupled with Self's capable subject handling and skill leads to one of the most successful and original works in twentieth century satire. 1 from the opening quotes to Great Apes, Will Self, Penguin Group, London 1998 2 from the Oxford Companion to English Literature, Ed. by Margaret Drabble, Oxford University Press, Oxford 1985 3 from The Philosophy of Laughter and Humour, ed. John Morreall, State University of New York Press, Albany 1987 4 from Great Apes by Will Self, Penguin Group, London 1998 1 1 ...read more.