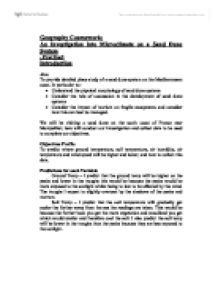 An Investigation into Microclimate on a Sand Dune System

Geography Coursework: An Investigation into Microclimate on a Sand Dune System - First Draft Introduction Aim To provide detailed place study of a sand dune system on the Mediterranean coast. In particular to:- * Understand the physical morphology of sand dune systems * Consider the role of succession in the development of sand dune systems * Consider the impact of tourism on fragile ecosystems and consider how this can best be managed. We will be visiting a sand dune on the south coast of France near Montpellier; here will conduct our investigation and collect data to be used to complete our objectives. Objectives Profile To predict where ground temperature, soil temperature, air humidity, air temperature and wind speed will be higher and lower, and how to collect this data. Predictions for each Variable Ground Temp - I predict that the ground temp will be higher on the peaks and lower in the troughs this would be because the peaks would be more exposed to the sunlight whilst being to low to be affected by the wind. The troughs I expect to slightly overcast by the shadows of the peaks and marrum. Soil Temp - I predict that the soil temperature will gradually get cooler the further away from the sea the readings are taken. This would be because the further back you get the more vegetation and woodland you get which would shelter and therefore cool the soil. ...read more.

I will still use them in my graphs and spearman's rank to check this though and if I can see then that they make a big impression on the findings then they will be removed. Sea - Point 1 = 41.10m, angle 6� Road between points 7 - 8 = 2 troughs Point 10 Shrub area Point 12 Land flattens out, readings taken every 10m Point 19 Woodland; shade, pine needles = cooler temp Clinometer hard to use increasing chances of human error Whenever Rob read the temp it always varied from my readings Plants & vegetation covered the ground getting in our way & may affect results Graphs This graph shows a strong correlation between the soil temps but in a different proportion. The soil temp is greater on the peaks than in the troughs. This graph shows the continuation of the soil temp beyond the peaks and troughs. I had predicted that the soil temperature would fall the further back from the beach you got and the nearer the woodland you got. This is almost right as the soil temp is progressively falling from the peaks readings, I hadn't expected the trough soil temperatures to have been quite as low though. The temps are lower in the troughs because of the shelter that they receive from the peaks around them and the vegetation that they have around them. ...read more.

The most worrying was perhaps the wind meters, sometimes you could feel a fairly strong breeze and yet they would not pick up anything. They would also let the average wind speed drop dramatically if the wind stopped leaving some very inconsistent results which could not be used to help out my hypothesis. I therefore made the decision to cut these from my investigation. Another piece of equipment which I felt hindered the investigation was the ground thermometer, which was either not very accurate or not used well as the results were in consistent and showed no real pattern that could be related to the microclimate. The whirling hydrometer also caused a few problems either by human error or inaccuracy as the results were a bit wavy, however the important results relating to the predictions could be seen. An error which I have noticed was that in fact point 1 on the results chart was point 2 on the measurement of the sand dunes. This didn't affect my results as I noticed it while I was doing my graphs but it does mean a point is missing. Other errors have been starred as anomalies and some have been removed from the results. There were limitations of our study. We ran out of time before we could finish, we only studied a small section of the beach and we could only collect one set of results. Oliver Jewell 1799 words ...read more.