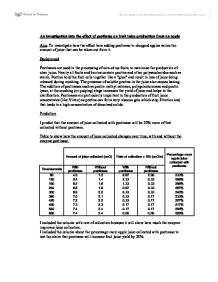 An investigation into the effect of pectinase on fruit juice production from an apple.

An investigation into the effect of pectinase on fruit juice production from an apple Aim: To investigate how the affect how adding pectinase to chopped apples varies the amount of juice that can be taken out from it. Background Pectinases are used in the processing of non-citrus fruits to maximise the production of clear juice. Nearly all fruits and berries contain pectins and other polysaccharides such as starch. Pectins hold the fruit cells together like a "glue" and result in less of juice being released during crushing. The presence of soluble pectins in the juice also causes hazing. The addition of pectinases such as pectin methyl esterase, polygalacturonase and pectin lyase, at the crushing (or pulping) stage increases the yield of juice and helps in the clarification. Pectinases are particularly important in the production of fruit juice concentrates (like Vimto) as pectins can form very viscous gels which stop filtration and that leads to a high concentration of dissolved solids. Prediction I predict that the amount of juice collected with pectinase will be 20% more of that collected without pectinase. ...read more.

This is because the amount of juice collected changes quickly over the first few minutes and having readings every minute does not monitor this change effectively. I could have read the amount of juice every 30 seconds and that would have given me more I didn't encounter any problems while doing this experiment. Ways I could improve this experiment are taking more readings to improve reliability, this would increase my reliability a lot. I could monitor the surface area of the apple chinks which would improve my reliability slightly. I could have repeated the experiment to improve my reliability greatly. This experiment is biologically significant because pectinase is used in the fruit juice industry. They need to maximise the amount of fruit juice from each apple and to do that, pectinase is needed as just demonstrated from my experiment. Ideas for further study are investigating the ratio of apple to pectinase and seeing if that is proportional to the amount of juice collected. Also I could see if pectinase works with other fruits such as oranges and compare to see in which fruit pectinase works best. ...read more.