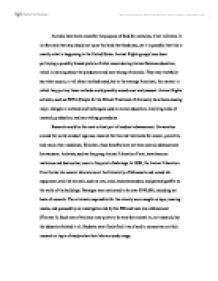 Animals have been raised for the purpose of food for centuries, if not millennia. It is often said that you should not curse the hand that feeds you, yet it is possible that this is exactly what is happening in the United States. Animal Rights groups have been portraying a possibly biased picture of what occurs during Animal Science education, which is learning about the production and care-taking of animals. They may truthfully say what occurs, or tell about methods used, but to the average American, the manner in which they portray these methods could possibly sound cruel and unusual. Animal Rights activists, such as PETA (People for the Ethical Treatment of Animals), have been causing major changes in methods and techniques used in animal education, involving areas of research, production, and care-taking procedures. Research could be the most critical part of medical advancement. Universities around the world conduct vigorous research that has led treatments for cancer, penicillin, and many other medicines. ...read more.

Changes have also been made to how these animals are trained. For example, when halter-breaking a cow, an almost always effective method to stop it from pulling back, is to tie the cow up for a period of time. The cow will usually learn rather quickly that pulling back only tightens the halter around their snout. Animal rights people have deemed this cruel and inhumane, since the hide around the snout may get sore or even soft. This potentially valuable tactic for teaching the animals not to pull away is no longer taught by the university instructors. In Florida, there is new legislation banning gestation cages for pig farmers (Lomartire 1). The activists may see it as a tiny, restrictive cage; however it is crucial to prevent the sow from accidentally rolling over onto her young. Also, it allows for close observation in case of any complications during birth. Although some changes caused by animal rights groups have had significant benefits, many changes have proved to be detrimental to the ability of students to efficiently work on livestock. ...read more.

There is no place on a syllabus for reaction. Animal Rights is one of the hottest topics out right now. There are people so passionate about it that they will do almost anything to show their compassion. They even go so far as to equate turkey farms to concentration camps (Walters 2). Students around the world must face these activists on a routine basis. In an introductory animal science class at Clemson University, almost an entire day of class was spent on how to deal with groups like PETA and what to do if confronted by them. Is it possible for student to fully reach their potential as animal science students when they must constantly be watching for an extremist looking to sabotage their efforts? In an interview with CNN, correspondent Sharon Collins asked Robert Tracinski, a senior fellow of the Ayn Rand Institute, about the effectiveness of PETA said, "I think the basic problem is that in upholding the rights of animals, what they're really doing is restricting the rights of human beings" (Collins 7). ...read more.