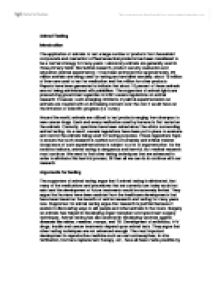 Animal Testing Introduction The application of animals to test a large number of products from household compounds and cosmetics to Pharmaceutical products has been considered to be a normal strategy for many years. Laboratory animals are generally used in three primary fields: biomedical research, product security evaluation and education (animal experiments). It has been estimated that approximately, 20 million animals are being used for testing and are killed annually; about 15 million of them are used to test for medication and five million for other products. Reports have been generated to indicate that about 10 percent of these animals are not being administered with painkillers. The supporters of animal rights are pressurizing government agencies to inflict severe regulations on animal research. However, such emerging criticisms of painful experimentation on animals are coupled with an increasing concern over the cost it would have on the limitation of scientific progress (i.e. cures). Around the world, animals are utilized to test products ranging from shampoo to new cancer drugs. Each and every medication used by humans is first tested on the animals. Currently, questions have been raised about the ethics surrounding animal testing. As a result, several regulations have been put in place to evaluate and control the animals being used for testing purposes. These regulations hope to ensure that such research is carried out in a humanely and ethical manner. Acceptance of such experimentations is subject to a lot of argumentation. As the statistics indicate, animal testing is dangerous and harmful, but medical research must continue. We need to find other testing techniques that are advanced in order to eliminate this harmful process, till then all we can do is continue with our research. Arguments for testing The supporters of animal testing argue that if animal testing is eliminated, that many of the medications and procedures that we currently use today would not exist and the development of future treatments would be extremely limited. ...read more.

(Alternatives to Animal testing on the Web: FAQs) An Italian Professor Peitro Croce has been fighting against animal testing for several years. The arguments he puts forth includes misleading results of animal tests while they are applied to humans. Parsley is considered to be a deadly poison for parrots yet we use it to flavor our food; Arsenic, a poison for humans but it is not harmful to sheep. Sheep, goats, horses and mice can also eat hemlock in large numbers while this is toxic to the humans. Lemon juice is toxic to the cats. A hedgehog can take a sufficient amount of opium can be taken by a hedgehog at one sitting but humans can't without the obvious effect. Morphine is regarded as an anesthetic for humans but if it is administered to cats; it generates a state of frenzied excitement. (Vivisection: Fact Sheet) Vitamin C is not something dogs, rats, hamsters and mice, have to worry about taking, for their bodies generate Vitamin C. If humans inhale a small amount of prussic acid fumes it can kill them. However, toads, sheep and hedgehogs can drink it without any harm; Scopolamine can kill humans with a dose of just 5 milligrams. To dogs and cats about 100 milligrams was considered harmless. Information like this can be misleading when scientists try to determine safe dogages. Penicillin, the first antibiotic, was experimented first on mice. Its application on guinea pigs would have entailed dangerous consequences, because penicillin controls the floral bacteria in the stomachs of guinea pigs and destroys them within a few days. The unpredictability of animal testing was thought to have harmful effect in the case of fialuridine. This drug successfully passed its animal test phase without much difficulty. However, when it is administered on fifteen human volunteers it resulted in severe liver damage, causing death to five of them and compelling two others to have liver transplants. ...read more.

For example if a scientists needs to study the brain of a rat, he can allow the other scientist to make use of the kidneys, or livers or parts for there concerned studies. Horst Spielmann of ZEBET of the German center for animal testing substitutes has reviewed decades of industry data on pesticides. He found out while mice and rats are reactionary to a chemical, it does not have to experience further tests on dogs. Spielmann expects that about 70% of tests on dogs can now be successfully avoided. There is a common attempt by researchers to use lab animals that are less prone to undergo the sensations of pain or discomfort. In Canada, many studies have substituted mammals with fish and now researchers are even attempting to apply bacteria in tests rather than the rats. Instead of shaving the back of an anaesthetized rabbit to test a skin product, can we use "Corrositex" a synthetic material for the same purpose. Similar solutions ought to be devised for many other kinds of experiments that presently use the animals. Conclusion: While there has been promise to find alternatives to animal testing, the best researchers can do for now is try to reduce the number of animals being used. They can resort to new scanning technologies like magnetic Resonance Imaging, which can assist doctors to learn about disease from human patients without the actual necessity for invasive surgery, or animal experimentation. Computer models can be used to devise the reaction of a drug to the animal, as a result it would eliminate the necessity for live animal experimentations. (Animal Experiments) The development to the extensive application of substitutes to animal experimentation will persistently gain momentum as people become more aware about the problem. Though it is hard to eliminate animal testing completely, consumers can prevent the unnecessary animal testing by boycotting certain products that don't necessary require animal testing. To conclude, all we has humans can do now is to try to reduce the number of animals being harmed in these experiments aimed at benefiting society. ...read more.