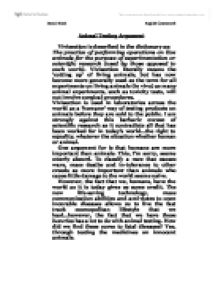 Animal Testing Argument Vivisection is described in the dictionary as: The practice of performing operations on live animals for the purpose of experimentation or scientific research (used by those opposed to such work). Vivisection literally means the 'cutting up' of living animals, but has now become more generally used as the term for all experiments on living animals (in vivo) as many animal experiments, such as toxicity tests, will not involve surgical procedures. Vivisection is used in laboratories across the world as a 'humane' way of testing products on animals before they are sold to the public. I am strongly against this barbaric excuse of scientific research as it contradicts all that has been worked for in today's world...the right to equality, whatever the situation whether human or animal. One argument for is that humans are more important than animals. This, I'm sorry, seems utterly absurd. To classify a race that causes wars, mass deaths and in-tolerance to other creeds as more important than animals who cause little damage to the world seems naive. ...read more.

(Quote taken from The Guardian newspaper published 8/12/1998) Science...moral? Two words that don't seem to fit in the same sentence. Science is to blame for most of the world's fear and suffering. A b**b, nuclear missiles, gases are all the splendid work of our friend science. Science is used today as nothing more than a beauty parlour for the superficial individuals who spend lavishly on cosmetics and luxuries not flinching an eyelid at the suffering that was endured for that pot of makeup. Another question raised for vivisection is Isn't it true that every major medical advance in the last century was a result of animal experimentation? Surprise, surprise the answer is...NO. Since the inception of the Nobel Prize for Physiology and Medicine in 1901, two thirds of the prizes have been awarded to scientists using various 'alternative' technologies, not animal experiments. In fact, results derived from animal experiments have had a very minimal effect on the dramatic rise in life expectancy in the 20th century. According to the Centres for Disease Control (CDC), the rise in life expectancy can be attributed mainly to changes in lifestyle, environmental factors, and improvements in sanitation and ...read more.

Variables are easily changed to produce volumes of data. In the publish-or-perish world of science, vivisection offers limitless opportunities for publication. Animal-based research is the science of the past. There are a number of alternatives available to modern researchers which are less expensive, more reliable and ethically sound. Studies performed in the test-tube (in vitro) have many advantages over animal experiments. They provide results rapidly; experimental parameters are easily controlled; and their focus on the cellular and molecular levels of the life process provides more useful information about how chemicals and drugs work or cause damage. Clinical and epidemiological studies are a vast source of data. They have provided us with more useful information about the nature of disease in our world than any other source. Modern computer technology has vastly improved our ability to analyze the huge volume of incredibly complex data available to us by studying the course of disease throughout the world. Cell and tissue cultures, CAT, PET, and MRI scans, quantitative structure-activity relationship analysis in drug design, and chemical toxicity assays are some of the modern approaches to research available to scientists today. We must ask ourselves why we rely on the science of yesterday. Daniel Black English Coursework ...read more.