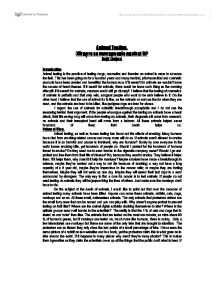 Animal Testing.Why are so many people against it?

Animal Testing. Why are so many people against it? By Ed Leyland Introduction Animal testing is the practice of testing drugs, cosmetics and theories on animal in order to advance the field. This has been going on for a hundred years and many medical, pharmaceutical and cosmetic products have been created and benefited the human race. If it weren't for animals we wouldn't know the causes of heart disease. If it wasn't for animals, there would be know such thing as the morning after pill. If it weren't for animals, mascara would still go clumpy!! I believe that the testing of cosmetics of animals is pathetic and that only vain, arrogant people who want to be safe believe in it. On the other hand I believe that the use of animal fur is fine, as the animals do not use the fur when they are dead, and the animals are bred to be killed, like pedigree dogs are bred for shows. I regard the use of animals for scientific breakthrough acceptable and I do not see the reasoning behind their argument. If the people who argue against the testing on animals have a heart attack, their life saving drug will come from testing on animals, their diagnosis will come from research on animals and their transplant heart will come from a baboon. All these animals helped saved hundreds of lives; their death helps us. ...read more.

Only a few laboratories use monkeys but these are some of the only labs that are brought to attention. The protestors are so biased they only show the bad points of a small percentage of labs. I have seen the same picture of a rabbit on two websites and in a book, yet the protestors claim this is what goes on in labs around the world. If it happens in many places why aren't they're many photos? This is makes them hypocrites as they claim the scientists cover up all the things that the public don't what to hear. If you took all the literature and all the websites against animal testing and complied all the points against animal testing, and then took all the drugs that have benefited humans, all the breakthroughs in science and all the names of people saved by animal testing people would realize that animal testing is the way forward. I believe that animals should be tested on; it is not 'speciesism', as described by Australian philosopher Peter Singer, but merely means of development of the human race. Is speciesism when you chose chicken over beef at a restaurant? Surely by this you are violating the animal's 'rights'. Can they sue you under the animal rights act? If you stand on a bug are you violating his rights as a bug? No, you are not. ...read more.

If the protestors don't like that and think it shouldn't have happened then they should have never been born. This is has been the way every species has evolved and if they cannot agree with it, they are fooling themselves. There is a food chain and humans are at the top of it for many animals. Humans have evolved and they are the master race on this planet. This isn't about some poor rabbit being cruelly tested on; it is about survival. If other species of animals started testing on animals would the protestors stop it or would they marvel at the cleverness of the animal? Indisputably, the animal that was testing on other animals would be tested on. The fear then arises that if the animal that is testing on other animals wants to test on a human what would we do? Of course this situation will never arise, and I will not speculate if and when it will happen if it does. Maybe at the moment animals treat the stories about animal testing as myths and horror stories, or maybe humans are thought of as aliens that abduct animals and test on them and impregnate them. (This does happen) Do animal rights protestors believed that the animals will think badly of us if we carry on testing? Who knows? All I know is that if the testing on animals continues, humans will benefit greatly, and if people do not believe in it they should not be able to benefit from it. ...read more.