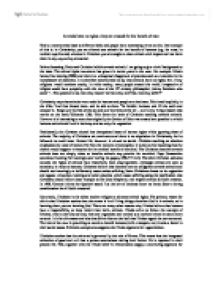 This is a controversial issue as different faiths and people have contrasting views on this. One example of this is, in Christianity you are allowed use animals for the benefit of humans (e.g. for meat, in medical experiments) whereas in Hinduism you are taught to treat animals with respect and not harm them in any way as they are sacred.

Before discussing Hindu and Christian beliefs towards animals, I am going to give a brief background to the issue. The animal rights movement has grown in recent years in the west. For example, Britain banned fox hunting (2006) and there is a widespread disapproval of practises such as vivisection in the manufacture of cosmetics. It is therefore controversial to say that animals have no rights; few, if any religions, would condone cruelty. In wider society, many people around the world, irrespective of religion would have sympathy with the view of the 19th century philosopher, Jeremy Bentham who asked “…The question is not, Can they reason? nor Can they talk? But, Can they suffer?”

Christianity says that animals were made for humans and people are dominant. This is said explicitly in the bible; ‘And God blessed them, and he said to them, “Be fruitful, increase, and fill the earth and conquer it.  Reign over the fish of the sea and over the birds of the air… over every living creature that moves on the earth.”’(Genesis 1:28). This forms the basis of Christian teaching towards animals. However it is interesting to note that originally the Garden of Eden was created as a paradise in which humans and animals lived in harmony and ate only the vegetation.

Traditionally the Christian church has championed issues of human rights whilst ignoring those of animals. The majority of Christians are omnivores and there is no stipulation in Christianity for its followers to avoid meat. Human life, however, is viewed as sacred. Christian teaching on abortion emphasises the value of human life from the moment of conception. It is due to this reasoning that the church would support vivisection for the medical benefit of mankind. The Christian doctrine towards animals does not simply relate to benefits animals may provide for mankind. Pope Constantine sanctioned hunting ‘for hunting’s sake’ during his papacy (708-715 AD). Therefore Christian attitudes towards the rights of animals have historically been unsympathetic. Although animals are seen as secondary in value to humans, Christians believe that humans have an obligation towards animals and should not knowingly or deliberately cause undue suffering. Some Christians choose to be vegetarian and oppose vivisection, hunting and other practices which cause suffering using the justification that Christians should follow Jesus’ example as the Good Shepherd, and respect animals as God’s creation. In 1928, ‘General Advice for Quakers’ stated: ‘Let the law of kindness know no limits. Show a loving consideration for all God’s creatures’.

Conversely, Hinduism is the oldest modern religion to advocate animal rights. The primary reason for this is that Hinduism teaches that the atman is in all living things; therefore God is in animals, so in harming them you are harming God. There are many other reasons why Hindus believe that humans have a responsibility to help, rather than harm, animals. Hindus strive to follow the example of Krishna, who in the Gita ate only fruit and vegetables and worked as a cowherd when he came down to earth. It is for this reason and also that Shiva rides on the bull that Hindus regard the cow as sacred. The role of the cow in providing so much to benefit humans (milk, transport, etc.) is also a factor in their sacred status. Krishna’s example also supports the Hindu argument for vegetarianism.

Hinduism teaches that the universe is governed by the rule of Karma. This means that the integrated collection of good and evil that a person accumulates during their former life is repented in their present life. This, together with the Hindu belief in reincarnation supply a convincing argument for believers in favour of vegetarianism: those that slaughter in this life will be slaughtered in the next. Furthermore, the Law of Manu says that any form of slaughtering is a sin.

Hinduism is a polytheistic religion, and many of its deities are closely connected with animals. For example, Ganesha is an elephant, Hanuman a monkey, and Vishnu has appeared as various creatures. This adds weight to the Hindu belief that animals should be treated with respect; clearly Hindu deities respected animals enough to be incarnated as them. As Swami Vivekananda said,

‘He serves God best, who is kind to all living creatures’.

In conclusion, it appears that neither Christianity nor Hinduism condones animal cruelty if deliberate and unnecessary, although the philosophical outlook of Hindus requires them to obey stricter restrictions on any abuse of animals than Christians.