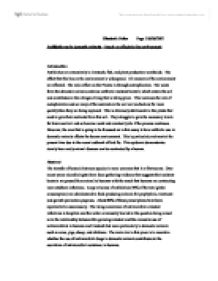 Antibiotic use in domestic animals - knock on effects to the environment IntroductionAntibiotics are extensively in livestock, fish

Elisabeth Fuller Page 1 05/05/2007 Antibiotic use in domestic animals - knock on effects to the environment Introduction Antibiotics are extensively in livestock, fish, and plant production worldwide. The effect that this has on the environment is widespread. All manners of the environment are affected. The main affect on the Plantae is through eutrophication. The waste from the domestic animals contains antibiotic resistant bacteria which enters the soil and contributes to the nitrogen-fixing that is taking place. This increases the rate of eutrophication and so many of the nutrients in the soil are leached out far more quickly than they are being replaced. This is obviously detrimental to the plants that need to gain their nutrients from this soil. They struggle to gain the necessary levels for basic survival and so become weak and eventually die if the process continues. However, the area that is going to be focussed on in this essay is how antibiotic use in domestic animals affects the human environment. This is particularly relevant at the present time due to the recent outbreak of bird flu. This epidemic demonstrates clearly how easily animal diseases can be contracted by a human. Abstract The transfer of bacteria between species is more common that it at first seems. Over recent years microbiologists have been gathering evidence that suggests that resistant bacteria are passed from animal to humans with the result that humans are contracting more stubborn infections. ...read more.

The Economic Reasons behind the Problem Traditionally, Britain has been a farming nation with large part of its economy being drawn from this source. During the Second World War, when import channels from the colonies but also from other places such as those from America and Europe were greatly reduced due to attack from the Germans, the British relied heavily on what farmers could produce for the entire population. The government realised that were the country not to starve the efficiency of home agriculture must be bettered. It became imperative to increase return to the maximum point. To this end measures were taken to boost the fertility of the soil (use of fertilizer) and the yield of the livestock. It was at this point that intensive farming became common practice. Before this animals were given plenty of space and allowed to roam free in large fields, foraging for food themselves. However the land would not be able to support the numbers of animals being introduced so new techniques were adopted. Now animals were kept in close confinement and fed at regular intervals. Traditionally chickens had been allowed to roam over the farmyard but this limited egg production and it was found to be far more economically sound to keep them in batteries. More eggs were produced and less manpower was needed to gather them. ...read more.

The cost incurred by the farmers in the production of the chickens did not change and increased by just 1% for the production of pigs. MacKenzie, D. (13th August 2003) Antibiotic ban cuts drug resistant bugs. New Scientist, http://www.newscientist.com/article.ns?id=dn4054 Another example of the gain to the human population by the removal of antibiotics from vetereinary practice can be seen in the ban of the use of avoparcin. This antibiotic awas used as a growth enhancer mostly in cattle, chickens and pigs. Shown in figure I is the structure of vancomycin. This is a bacteriocidal drug used in humans to eliminate the Enterococci bacteria. However, as you can see below the structure of avoparcin is very similar to that of vancomycin. This means that when the bacteria residing in the gut of cattle, chickens and pigs become resistant to avoparcin they also become resirtant to vancomyicn giving rise to a new form of the enterococci bacteria called vancomycin-resistant enterococci (VRE). This is particularly serious as this strain can be passed across the species divide to humans in two main ways - handling the animals and eating their meat. In order to restrict the spread of VRE the use of vancomycin-like drugs must be kept to a minimum, hence the ban of avoparcin. Hawkes, N. (1998) Antibiotics in Catlle Feed Linked to Superbug. The Times of London (UK), http://www.mindfully.org/Farm/Antibiotics-Cattle-Superbug24mar98html; Anonymous (1997) Vancomycin-resistant enterococci (VRE). Association of Medical Microbiologists, http://www.amm.co.uk/newamm/filees/factsabout/fa_vre.html Figure I http://www.cai.mcgill.ca/meded/drugdb/vancomycin/vancomycin_db.html Figure II http://www.chromatography-online.org/HPLC/Chiral-Stationary-Phases/Macrocyclic-Glycopeptide/rs85. ...read more.