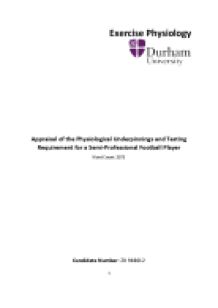 Transfer-Encoding: chunked ﻿Exercise Physiology C:\Users\Joshua\Pictures\Durham-University-logo-transparent.png Appraisal of the Physiological Underpinnings and Testing Requirement for a Semi-Professional Football Player Word Count: 2372 Candidate Number: Z0 948612 Degree: Sport, Exercise and Physical Activity BA (hons) The following report undertakes an individual assessment on a 21-year old, male, defensive footballer, who currently plays in the second division of the Wearside football league. In undertaking this assessment, it aims to establish both inter-personal and sport specific needs, which can then be used for the design and implementation of a testing programme. Once the needs of the subject and the sport have been sufficiently explored, relevant methods of testing are selected, then implemented, using evidence-based testing protocols. The overarching aim of this report, is to establish performance indicators which could then be used to aid the development of an individualised training programme. Football is a team sport which is most commonly played with 11 players on each team; the overarching purpose of the game, is to use a variety of kicking techniques to stop the ball entering one goal and get it into the opposing teams (FA, 2016). Elite football, demands a unique blend of athletic capabilities ranging from aerobic endurance to explosive power and repeated sprint speed (Hoff, 2005). When combined with technical proficiency and tactical awareness, high levels of performance can be achieved (Bloomfield, Polman, and O?Donoghue, 2007). At the elite level, players have been shown to cover distances between 10-13 Km and undertake between 150-250 more demanding, explosive style movements (Mascio and Bradley, 2013; Osgnatch et al., 2010). More specifically, elite players distribute their efforts as shown; standing 19.5%, walking 41.8%, jogging 16.7%, running 16.8%, sprinting 1.4%, and other 3.7% (Mohr et al., 2003). Due to extended periods of moderate activity, metabolic analysis suggests football is predominantly dependent on the aerobic energy system; however, crucial moments during a game are more commonly defined by short, high intensity bouts of activity, which are typically funded by the anaerobic energy system (Sporis et al., 2009). ...read more.

This research opted for the relative V0â max test, as this test is capable of collecting data with greater specificity (Dlugosz et al., 2013). Specifically, this test was selected for its ability to provide a direct measurement of aerobic endurance (Powers and Howley, 2008). Furthermore, the relative V0â max test has been shown to operate with greater levels of accuracy than other common methods such as the multi-stage fitness test (cooper et al., 2005). Protocols VO2 workload began at 8kmph, increasing by 2kmph every three minutes until volitional exhaustion occurred. HR and RPE were measured at the end of every three-minute interval. Equipment Unknown Vertical jump Jump height is being measured as Gee et al. (2011) identified a relationship between vertical jump results and power output. In eliminating arm swing, Young (1994) suggests that the test provided a greater evaluation of the leg extensor muscles. The force plate data methods have been selected specifically as Aragón (2000) found, when compared with the other vertical jump protocols, force plate data was the most accurate. However, using protocols which facilitate arm motion, could have created results more relatable to actual performance, as players are unlikely to jump with self-restricted arm movement. Furthermore, the Protocols The subject was required to stand in an erect position, placing their hands on their iliac crest, then squat to their perceived optimal depth and then jump vertically. The subject was required to jump 3 times and take 2 minute breaks between each jump, following protocols develop by Ostojic (2006). Equipment Probiotics, Just Jump, Huntsville AL. T-test The T-test has been selected as Semenick (1990) states it is a valid test for evaluating agility. More specifically, LeonCarlyle (2008) suggests the t-test evaluates a range of specific traits which are required on a football pitch, for example, foot speed, power and direction change (Sheppard and Young, 2006). LeonCarlyle (2008) suggests that coaches and trainers found, t-test results matched which the players they deemed to be the most agile further supporting the tests validity and reliability. ...read more.