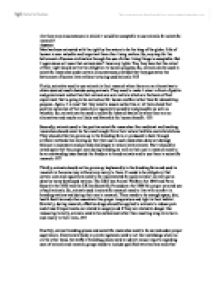 Are there any circumstances in which it would be acceptale to use animals for scientific research?

Are there any circumstances in which it would be acceptable to use animals for scientific research? Answer: Man has been entrusted with the right by the nature to be the king of the globe. Life of human is ever valuable and important than other living matters. So, any step for the betterment of human civilization through the use of other living things is acceptable. But it again does not mean that animals don't have any rights. Yes, they have but the extent of their right should not be the obligation to human progress. So, animals can be used in scientific researches under certain circumstances provided that they guarantee the betterment of human lives without torturing used animals.-103 Firstly, scientists need to use animals in their research when there are no alternatives to obtain desired results besides using animals. They need to make it clear in front of public and government authorities that animals are sole matters which are the basis of their experiment that is going to be carried out for human welfare rather than for devastating purpose. ...read more.

in scientific research.-107 Thirdly, animals should not be grown up haphazardly in the breeding farm and used in research in the same way without any mercy to them. It needs to be obligatory that certain rules and regulations need to be implemented for such animals' correct use as done by many developed nations. The USA has Animal Welfare Act 1966 and Farm Security Act 2002 and the UK has Scientific Procedures Act 1986 for proper care and use of such animals. So, animals used in scientific research need to live with comfort in breeding stations and during their use in research. There needs to be enough space, diet, health facilities and other essentials like proper temperature and light in their habitat. Similarly, during research, effective drugs should be applied to animals to reduce pain and stress if experiments are related to surgery and if they are related to danger like measuring toxicity, animals need to be euthanized rather than resulting long-term harm and misery to their lives.-163 Fourthly, animal breeding places and scientific researches need to be carried under proper supervision. ...read more.

human wants.-77 Sixthly, scientific researches related to behavior and psychology study are the fields where animals can be used without any obligations. As such experiments provide no potential danger as well as pain and other kind of animal rights violation such as mistreatment of animals; researchers need to be encouraged to use animals in such acts. -52 Scientific researches involving the use of animals as like in the case of medicine and university education have ever increased our quality of life and standard of living. But human's welfare traumatizing animals is mind blowing. As animals too have lives, their lives too need to be treated with due respect. So, it is must that certain circumstances like less pain and suffering to animals, proper rules and animals' use only when absolutely necessary need to be given top priority during scientific research otherwise the matter of using animals is ever unacceptable to today's rational generation and generations to come.-106 Words in the essay: 806 -The End- ...read more.