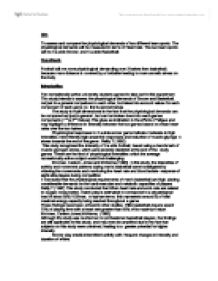 Aim To assess and compare the physiological demands of two different team sports. The physiological demands will be measured in terms of Heart rate. The two team sports will be 5 a-side Soccer, and 5 a-side Basketball. Hypothesis Football will me more physiological demanding over 2 halves then basketball, because more distance is covered by a footballer leading to more somatic stress on the body. Introduction Ten recreationally active university students agreed to take part in this experiment. This study intends to assess the physiological demands of Soccer and Basketball, not just in a general comparison to each other, but takes into account values for each component of each game i.e. first & second halves. The study is multi dimensional in the fact that the physiological demands can be compared not just in general, but can be broken down into each games components (1st & 2nd Halves) This gives an indication to the effects of fatigue and may highlight a difference in intensity between the two games based on mean heart rates over the two halves. Physiological responses to 5 a side soccer game indicate moderate to high intensities, intermittently high anaerobic responses and reduction of muscle glycogen stores towards the end of the game. ...read more.

The football game was played in two fifteen minute halves, separated with a 5 minute break in which subjects were asked to sit down in order to keep values as constant as possible over the two sessions. Subjects were allowed to receive fluid in the 5 minute half time period, but were asked to repeat what ever they drank exactly the same in the second session. In the second session, all variables were kept constant, two fifteen minute halves, a five minute warm-up and half time break. Indeed the only variable which differed was the fact that the activity undertaken was basketball. At the end of each session the polar data was downloaded to a laptop pc for later analysis and imported into an excel datasheet. Results GRAPH ONE GRAPH TWO GRAPH THREE Raw Data Containing Heart Rate Values and associated errors are listed in Appendix Discussion Taking into account all three graphs and all other data, football gives a marginal increase in heart rate values over both halves, but this isn't enough to be significant. In general the results gathered show a close trend in all aspects of the sessions. Looking at Graph one , the trend lines follow almost identical patterns. ...read more.

The heart rates returned to normal once the 2nd period of play commenced though. Elite basketball players spend 75% of playing time with a heart rate greater than 85% of its maximum value. McInnes, Carlson,Jones,McKenna, (1995). The mean values for basketball don't quite reflect these findings, with average heart rate for basketball at around 150 +- 17 bpm. With the maximal heart rate for my group of 21 year olds at roughly 200 bmp, this is just off the 85% value of 170bpm. This value is is worked out for the mean of the group, and I did find that 3 of the 10 players did reach 85% of their maximal heart rate. Motivation was a big factor in the other 7 subjects failing to reach 85% of their maximal heart rate, as I think some didn't enjoy playing either game as much as they could have done. Overall both games were found to be relatively physically demanding and therefore recognise findings in all of the case studies and literature reviewed in the introduction. I failed to find any evidence published stating that either sport was physically demanding, and from my heart rate values for either game cannot draw any solid conclusion as to which is the more physically demanding. ...read more.