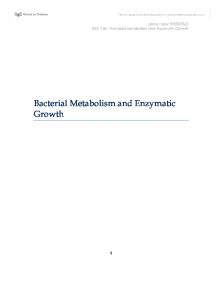 Bacterial Metabolism and Enzymatic Growth Introduction Bacteria differ in the substances from which they derive energy and the enzymes that they produce. Enzymes are biological catalysts; they are substances produced by the body to control the rate of reactions within the body. Particular enzymes, exoenzymes, are produced in large quantities and are excreted into the cell's environment where they speed up the catabolism of insoluble polymers for nutrients (Madigan, 2009). Endoenzymes, unlike exoenzymes are produced in small quantities and remain within the cell (Kocholaty et al, 1938). The purpose of these experiments is to determine the enzymatic and metabolic activities of a variety of bacteria in varying environments. The environments in which the bacteria are observed contain the presence of indole, urease, hydrogen sulfide, and carbohydrates lactose, sucrose, and glucose. The species of tester bacteria cultures for metabolic activities are Escherichia coli (Ec), Pseudomonas aeruoginosa (Pa), Bacillus subtilis (Bs), and Proteus vulgaris (Pv). The enzymatic activities of bacteria are observed in the presence of the enzymes amylase, lipase, and protease. The bacteria used are Escherichia coli, Pseudomonas aeruoginosa, and Bacillus subtilis. The metabolism of the aforementioned carbohydrates results in a change of acidity, evident by a colour change in the presence of the bromocresol purple indicator. Each carbohydrate broth is inoculated with two loopfuls of each bacterium. If the broth undergoes metabolism and becomes yellow in colour, it is acidic. The broth is basic if, after metabolism, it becomes dark blue in colour. The broth will remain purple if it is neutral after metabolism. The metabolism of particular carbohydrates by some bacteria may be accompanied by gas formation which will be collected in an inverted tube (Madigan et al, 2009). ...read more.

Name of Organism Colour of Broth Before Incubation Colour of Broth After Incubation Presence of Urease E. coli Yellow Yellow - P. aeruginosa Yellow Yellow - B subtilis Yellow Yellow - P. vulgaris Yellow Pink + Table 6: Production of Hydrogen Sulfide Below are results obtained from the inoculation of of E. coli, P. aeruginosa, B. subtilis, and P. vulgaris into SIM agar butts. Ferric iron is present in the SIM medium and will react with the production of hydrogen sulfide, if produced by the bacteria. The result is a blackening of the medium. Name of Organism Colour of SIM Medium Presence of Hydrogen Sulfide E. coli Pale yellow - P. aeruginosa Pale yellow - B subtilis Pale yellow - P. vulgaris black + Table 7: Exoenzyme Activity Below are results obtained from the spotting of Escherichia coli, Bacillus subtilis, and Pseudomonas aeruginosa onto agar plates of starch, lipids present in tween 80 and proteins, specifically casein which is present in the milk agar. The production of corresponding enzymes to the substances in the agar will alter the area surrounding the bacteria. The enzymes involves are amylase, lipase, and protease, respectively. Name of Organism Starch Agar Tween 80 Agar Milk Agar Hydrolysis Lipolysis Proteolysis E. Coli - - - B. Subtilis + - + P. aeuroginosa - + + Table 8: Endoenzyme Activity Below are results for the presence of catalase is obtained from the addition of hydrogen peroxide to the bacteria Escherichia coli, Bacillus subtilis, and Pseudomonas aeruginosa on the tween 80 agar plate. The results for the presence of oxidase is obtained from the spreading of each of the aforementioned bacteria onto a piece of filter paper which had been wet with tetramethyl-p-phenylenediamine reagent. ...read more.

The colour change occurs as a result of the oxidation of Kovac's reagent, which acts as a false electron acceptor, by cytochrome c (Madigan et al, 2009). There are many potential errors which may have occurred to produce results that differed from the expected results. Contamination may have occurred, and was likely seen in the oxidation reaction of E. coli. An insufficient amount of bacteria may have been inoculated into the broths producing a very weak outcome which may not have been noticed. Human error may have occurred, such as in the observation of the results. For instance, the presence of a clearing as a result of exoenzyme tests may not have been seen, despite being present. These tests are useful as they are simple tests which can be used to determine the species of a bacterium. This would be helpful in the diagnosis of bacterial diseases as it is an efficient way to obtain results at a low cost. For example, E. coli can be identified by an indole test. The disadvantage to these tests, however, is that an indole test alone may not necessarily mean that the bacterium is E. coli. It could also mean that the bacterium being tested also converts tryptophan to indole. Several tests would have to be done to confirm that the bacterium is E. coli, and doesn't only have similar results. In general, the experiments performed were successful. The majority of the enzymatic and metabolic activities of E. coli, P. aeruginosa, B. subtilis, and P. vulgaris were correctly observed. Most of the results obtained were those of the ideal. Most of the results obtained that were not those of the ideal results could be explained by a minor error which could be avoided if the experiment were performed again. ...read more.